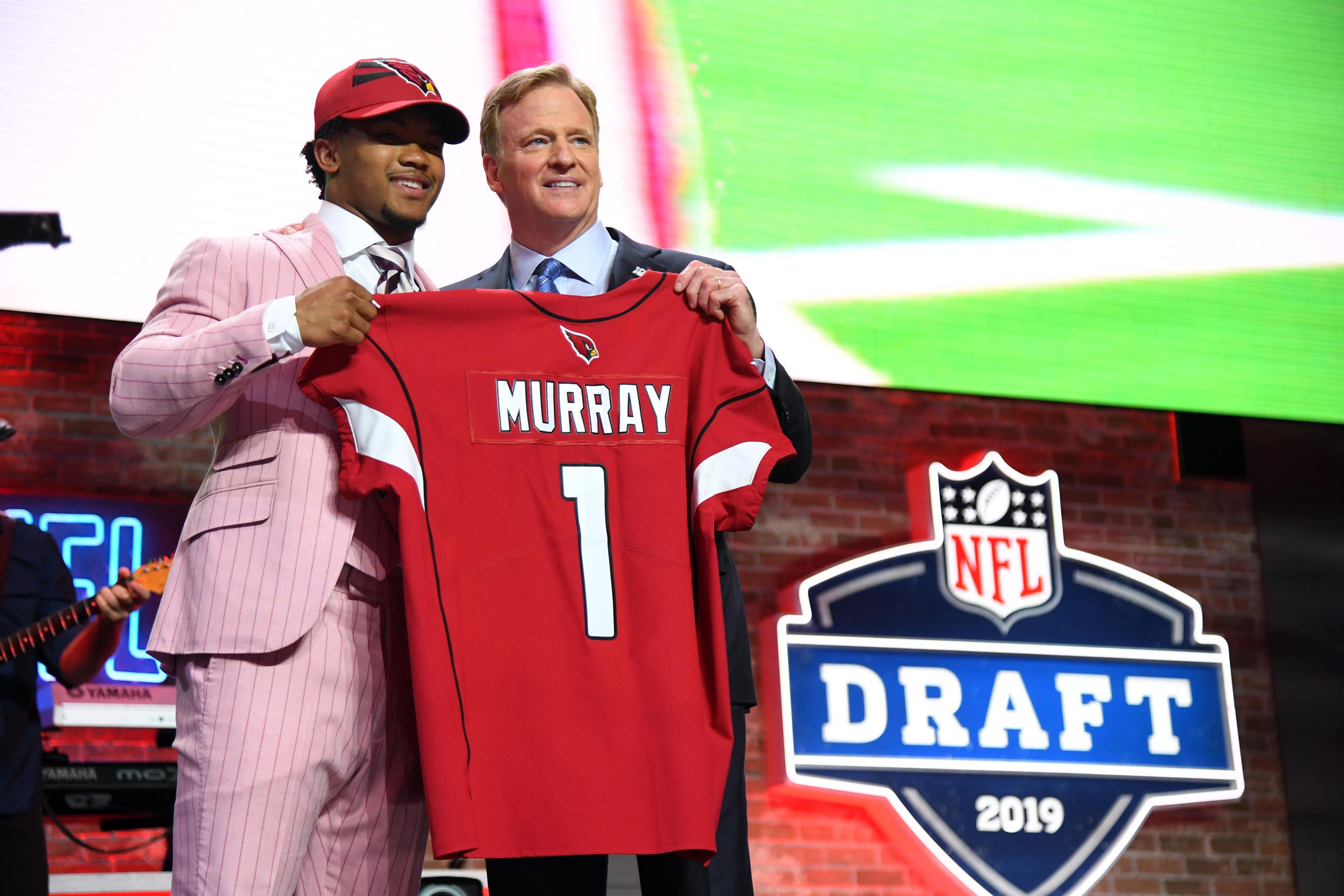 Synopsis: I usually provide an assessment of potential draft busts prior to the start of their professional careers. Otherwise, it’s hard to claim having correctly predicted which players would distinguish themselves without the benefit of additional information. I had finished writing most of this article prior to the start of the 2019 NFL season, but never posted it. Based on my prediction that 2019 #1 overall pick Kyler Murray has/had the best chance of being a bust, I presume you’ll trust me that I didn’t change my initial assessments. Even after watching Murray’s strong start to his career, which resulted in him being named the NFL Offensive Rookie of the Year, I just don’t see him as another sub-6′ QB who can beat the odds.

Having recently watched coverage of the NFL Scouting Combine, I started preparing my analysis for the upcoming 2020 NFL draft. As I pulled up my models and summary tables, I realized that I had never published my predictions for the 2019 draft. To the extent I have changed anything since my initial assessment, I have highlighted the changes in red.

To start, I’d like to revisit the rankings / ratings I used when developing my 2019 NFL Mock Draft.

Relative to the four sources referenced above, I fared quite well. With a total deviation of 35 places, only the NFL Network served as a better predictor than the T10B mock draft (41 places). Before taking too much credit, I need to acknowledge that I primarily relied on the wisdom of the [more informed] crowd. If Entourage’s Ari Gold had separated his fictional character from his personal life, you might get the reference without a prompt.

At first glance, the outliers (i.e. surprise picks) appear to be Clelin Ferrell at #4, Daniel Jones at #6, and Devin Bush at #10. However, Ferrell’s selection seemed to shock all the experts so that stands out to me as a likely reach.

After evaluating the careers of players taken as top 10 draft picks over the last 40+ years, I developed 7 Lessons to help teams avoid potential busts. Specifically, these lessons include:

1. There’s no such thing as a sure thing.

This lesson concerns teams which might consider mortgaging their futures by trading a substantial package of future draft picks in order to move up and take a “can’t miss” player. By following this lesson, the San Diego Chargers could have avoided #1 Top 10 Bust Ryan Leaf and the Cleveland Browns could have avoided 2012 draft bust Trent Richardson. Note to self: Richardson’s NFL career is over so it’s time to write a T10B article about him.

With respect to the 2019 NFL Draft, no player earned the label of a “can’t miss” talent worthy of an irrational package of future picks. 2018 Heisman Trophy winner Kyler Murray impressed draft analysts enough to be a consensus #1 overall pick. Still, he certainly wasn’t considered a “sure thing” given his 5’10” frame. Given that no teams went overboard by trading up, this lesson doesn’t apply this year.

2. When in doubt, draft offensive linemen and avoid receivers.

3. Don’t reach due to combine performance or pre-draft hype.

Most draft experts believed DE Clelin Ferrell would be drafted in the bottom half of the 1st round. As a result, his selection by the Oakland Raiders with the 4th overall pick shocked them. Unlike some top 10 overall picks who lacked on-field success, Ferrell won the 2018 Ted Hendricks Award as the nation’s top defensive end. He arguably could qualify as a reach based on mock drafts but doesn’t serve as an example for this lesson given his on-field success in college.

No red flags prior to the draft.

Read on to learn whether the recent arrest of #3 overall pick Quinnen Williams changes my thought.

5. Avoid players who regressed in their final college season.

Injuries don’t count as part of this lesson so DE Nick Bosa and DT Ed Oliver don’t qualify. However, Devin Bush experienced a fall-off last year so he does.

6. Avoid QBs who were interception leaders.

Not applicable this year.

Not applicable this year.

When developing my criteria for establishing a Top 10 Bust, I offered several exemptions to separate the bad from the really bad. Of note, I excluded players who:

By limiting this post to the the top 10 overall 2019 NFL Draft picks, I avoid the first exclusion. With respect to the second, I offer the following table to highlight their college achievements.

TFL – Tackles for a loss

I concede that the previous table has a lot of information that doesn’t necessarily justify each player’s draft position. Still, it offers a quick snapshot of his size, strength and athleticism.

Kyler Murray measured 5’10” at his Oklahoma Pro Day. Based on the picture, I assume the measurement included his hair. Even though most NFL draft experts have overcome Murray’s height deficiency, I haven’t. As a 2012 3rd round pick, Russell Wilson proved that a sub-6′ tall QB could succeed in the NFL. Call me crazy, but I wouldn’t take the same bet on the 1st overall pick.

I offer the following bust potential percentages relative to historical players taken with the same pick in the draft.

I readily admit that Murray had a much better rookie season than I thought he would. After one year, he already has surpassed the career totals of #9 T10B David Klingler in wins (5 vs.4), TDs (20 vs. 16) and WAV (14 vs. 10) so he’s unlikely to be remembered as a Top 10 Bust. Still, he has a long way to go to avoid bust status.

2012 #2 overall pick Robert Griffin had a better rookie season than Murray with 9 wins (including a playoff appearance), the same number of TDs (20) with fewer INTs (5 vs. 12), and a higher WAV (18 vs. 14). With a career limited by injuries, Griffin could be considered a bust. Of note, #8 overall pick Ryan Tannenhill has had 3x more career wins (49 vs. 16) and a promising future in Tennessee having supplanted 2015 #2 overall pick Marcus Mariota as the starting QB.

In addition to worrying about Murray’s future as a small QB in a league with much larger men, I’m concerned about him playing for Head Coach Kliff Kingsbury. Having coached successful college quarterbacks such as Case Keenum, Johnny Manziel, Baker Mayfield and Patrick Mahomes, Kingsbury has earned a reputation as a quarterback whisperer. With only 1 winning season as a head coach in college or the NFL, however, I question Murray’s opportunity for near-term success.

2. Nick Bosa – I predicted his brother Joey would be a bust when evaluating the 2016 NFL Draft. I won’t that mistake twice. Pro Bowl talent if able to avoid injury. Bust potential: 10%.

Having been named the 2019 NFL Defensive Rookie of the Year, Bosa did not disappoint. At this point, there’s no reason to update my initial comment. On the contrary, it might be worthwhile to say that he has a much better chance (i.e. > 20%) of becoming a Hall of Famer.

Several days ago, authorities at LaGuardia Airport in NYC arrested Williams for boarding a plane with an unregistered gun. Missing from the scrolling ticker on ESPN, Williams had packed the unloaded gun in his checked baggage and he has a license to carry in Alabama. In a world of journalistic sensationalism (offset by high-priced attorneys), I predict this one will blow over.

Ferrel recorded 38 tackles and 4.5 sacks as a rookie last year. While not great, these numbers support an argument against the former Clemson DE being considered a bust. The better argument might be that Raiders Head Coach Jon Gruden reached with the pick and could have gotten him lower in the draft.

5. Devin White –  Not a superstar, but should be a solid contributor. Bust potential: 20%.

With 91 tackles, 3 forced fumbles, and 2.5 sacks, White had a strong rookie year. More impressively, he led the league with 121 return yards (including 2 TDs) on fumble recoveries. If anything, I underestimated his potential . . . for now.

The New York Football Giants drafted Jones as the heir apparent to future Hall of Famer Eli Manning. The 2019 #6 overall pick began his career with wins in his first two starts. From there, reality set in as the rookie finished his first year with a 3-10 record and a league-leading 18 fumbles. Jones had three games with at least 4 TD and 0 INTs so he clearly can play in the league. As long as he learns to protect the ball, he has a bright future in the Big Apple.

At the end of the 2019 season, Eli respectfully retired from the NFL without diminishing his career by playing for another franchise. After the 2011 NFL season (including a 2nd Super Bowl victory against Tom Brady), pundits questioned whether Eli should be viewed as being better than his brother. With a record of 48-67 (0-1 in the playoffs) since then, those same pundits are questioning whether the younger Manning deserves to be in the NFL Hall of Fame. I’ll assume they simply want to draw viewers because the premise is preposterous.

By the way Steven A., could you ever imagine that your preposterous $8 million / year contract would be dwarfed within a year by commentators like Tony Romo (for $18 mil) who only have to work during one sports season? As another aside, just wait until your network signs Peyton to an even bigger deal.

As a Pro Bowler with a rookie-leading 10.5 sacks, Allen supported my initial impression. At this point, Nick Bosa is the only player who may challenge my statement that Allen will have the best career of the top 10 2019 draft picks.

With all due respect to Hall of Famers Mike Ditka and Kellen Winslow, game-changing tight ends can be counted on one finger: Rob Gronkowski. Admittedly, Tony Gonzalez, Jimmy Graham and Jason Whitten deserve their current or future Hall of Fame status. However, given the limited success at the position, I would not risk a top 10 pick on a tight end.

The Lions presumably took Hockenson hoping to offer another weapon for QB Matt Stafford. After starting every game since 2011, Stafford got injured and only started 8 games during the 2019 season. Perhaps the Lions now will look to draft a QB to throw to Hockenson. Until proven differently, I argue that the selection of a tight end with a top 10 pick makes no sense.

It’s still too early to say, but I may need to expand my interpretation of Lesson 5 (i.e. avoid players who regressed during their final year in college). Earlier in this post, I provided an exemption to Ed Oliver for this lesson because he got injured before declaring for the draft.

In retrospect, his last year in college reminds me a lot of Jadevon Clowney’s. I don’t fault any player with a proven track record to risk further injury and miss out on life-changing financial security. However, any GM should prefer someone willing to run through the finish line.

With 1 forced fumble, 4 fumble recoveries (with 1 TD return), 9 tackles for a loss, and over 100 tackles as a rookie, Devin Bush has a bright future. The Steelers may have drafted him higher than they needed to, but I’m not worried that they will second guess the pick.