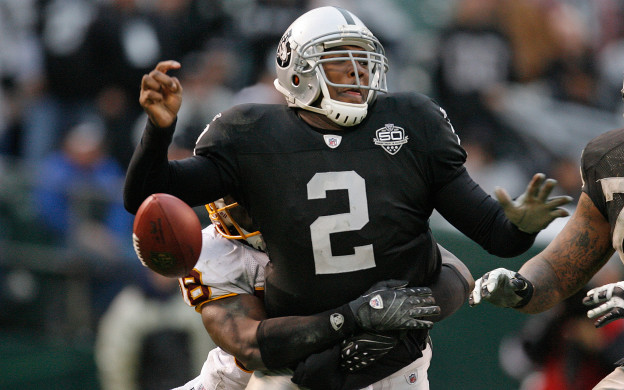 Synopsis: JaMarcus Russell certainly has the résumé to earn the top spot in a countdown of all-time busts. After winning the 2006 Manning Award, Russell went to the Oakland Raiders with the first pick of the 2007 NFL Draft. He clearly didn’t live up to expectations given his 7-18 starting record and career totals of 4,000 yards, 18 touchdowns, and 23 interceptions. Regardless, I can’t rank him higher than #3 because no other quarterback taken in that draft had a successful career. For that reason, his failure seems less dramatic and less worthy of one of the top two spots.

Teams took quarterbacks with five of the first 12 overall picks in the 1999 NFL Draft. That draft class included #5 Bust Akili Smith and T10B Honorable Mention Cade McNown. While not honored by T10B, Tim Couch also underachieved as the 1999 #1 overall pick. As such, that draft could/should be remembered as the Year of the Quarterback Bust. Unlike their draft classmates, NFL MVP Daunte Culpepper and probable Hall-of-Famer Donovan McNabb excelled. In contrast, not one decent quarterback came from the 2007 Draft. As such, it could/should be considered the Year of No Quarterback.

There were eight quarterbacks (the “Elite Eight”) drafted in 2007 who have thrown for at least 1,000 yards in the NFL. The table below shows the production of these quarterbacks. I included 2008 #3 pick Matt Ryan as a comparison because he has outperformed the entire group on his own.

With respect to the Elite Eight, Trent Edwards has put up the best numbers with 14 wins, 6,033 yards and 26 touchdowns. Needless to say, it’s an underwhelming group if those stats came from the most productive quarterback.

Currently, Drew Stanton remains the only QB from the 2007 NFL Draft class still on an active roster. As a 30-year-old backup with career totals of 1,700 passing yards and 7 touchdowns, he likely won’t be able to change anyone’s perception of this group. To his credit, Stanton filled in admirably when Carson Palmer got injured earlier this year. Specific, Stanton went 2-1 as a starter and threw for 529 yards with 2 touchdowns and no interceptions. In those three starts, he increased his career passing yardage and touchdown totals by 40%.

[I originally wrote this post after the 8th week of the 2014 season. Since then, Drew Stanton has more than doubled his career totals. Specifically, he has won 7 out of 9 starts and added over 2,300 passing yards and 14 touchdowns. Frankly, he’s proven to be a serviceable NFL back-up.

At the same time, Matt Ryan’s greatness has continued. Consequently, the disparity between Ryan and the Elite Eight has widened significantly over the last 2 1/2 seasons.]

Relative to the group, only Tyler Thigpen performed as expected. Of note, his WAV of 10 matched the expected WAV for a 7th round pick. Despite a 1-11 career record, Thigpen proved to be a reasonably efficient quarterback. Specifically, he earned a passer rating of 72.5 after throwing for 3,222 yards with 21 touchdowns and 18 interceptions.

Based on the same comparison of actual to expected WAV, JaMarcus Russell proved to be the most underachieving quarterback in the group. Of note, a #1 overall pick has an expected WAV of 67. With a WAV of 6, Russell offered less than 10% of the production of his peer group.

Despite the lack of quarterback talent in the 2007 Draft, only Russell and Brady Quinn deserve all-time bust consideration. Frankly, the other players just weren’t drafted high enough to warrant such disappointment. Depending on whom you ask, Quinn had the potential to be a top 5 overall pick. He ultimately went to the Browns as the 22nd overall pick instead. Even with the lower expectations of a late versus early 1st round pick, Quinn underperformed by finishing his career with 3,000 yards, 12 touchdowns, and a 4-16 record.

Quinn has been included on numerous all-time bust countdowns. In contrast, I excluded him from T10B consideration. Specifically, the expected value of a late 1st round pick just isn’t high enough when compared to an early 1st round pick. For this reason, I established The Brady Quinn Exemption for all players taken outside of the first 10 overall picks. Regardless, Quinn performed poorly enough to earn a T10B Honorable Mention. Russell, on the other hand, doesn’t deserve any exemptions, unless the AMA certifies Mike Williams Disease (i.e. getting fat).

[Since writing this article, I learned that the AMA certified obesity as a disease. Apparently, the medical group made the certification to bring more attention to the problem and attract more money to its treatment. I applaud their decision, but it doesn’t change my assessment that it shouldn’t create a valid excuse for a potential Top 10 Bust.]

As a redshirt freshman during Nick Saban’s last year at LSU, Russell platooned with senior Marcus Randall. Saban simply wanted them to be game managers given the team’s strong defense and rushing attack. When Les Miles arrived one year later, he didn’t ask much more of Russell. For the most part, the quarterback met this objective, and led LSU to a spot in the SEC Championship Game.

Russell unfortunately got injured in the game, which ended in a 34-14 loss to 13th-ranked Georgia. Even though Matt Flynn replaced Russell in the 2005 Peach Bowl (a 40-3 victory over the 9th-ranked Miami Hurricanes), Russell deserves much of the credit for the team’s top 10 final ranking that season. In case you’re wondering, Matt Flynn is the same one who has Green Bay’s single-game franchise record of six touchdowns. Yes, he threw more touchdowns in a single game for the Packers than Bart Starr, Brett Favre, or Aaron Rodgers.

[Note: One week after I wrote this post, Aaron Rodgers matched Flynn’s franchise record of 6 TDs in one game. And since I’m at it, Favre set a personal high of 6 TDs in a game while with the Jets.]

In Russell’s junior year, LSU still had a top-ranked defense. However, they didn’t have a quality running back to replace Joseph Addai, who went to the Colts in the 1st round of the 2006 Draft. Russell had the same number of attempts per game in 2006 as he did in 2005, but he got more from each throw. Specifically, he improved in the following stats.

With two conference losses, LSU didn’t qualify for the 2006 SEC Championship game. Still, Russell played well enough to earn the 2006 Manning Award as the NCAA’s most outstanding quarterback. Given his success, Russell decided to forgo his senior year and declared for the 2007 draft.

In addition to putting up impressive numbers during his last year in college, Russell had a great combine. During the annual beauty pageant, he impressed many teams and draft experts (i.e. not just Dr. Kiper and Mr. McShay). Specifically, they gushed over his size (6’6’’ and 265 lbs), quickness, and arm strength. Given the Raiders’ need for a quarterback, no one second-guessed the decision to take him with the 1st overall pick. At least, I haven’t found anyone who questioned the decision at the time.

Even before Russell arrived at the Raiders’ facilities, his NFL career got off to a rocky start. In what was either a brilliant decision or one that doomed his career, Russell (ok, his agent) decided to hold out for more money. Specifically, the QB skipped training camp, the preseason, and the first week of the regular season.

In retrospect, it’s hard to challenge Russell’s decision because he got almost $32 MILLION in guaranteed money. On the other hand, the decision could have doomed his career because he never recovered from missing so much practice. Russell also lacked motivation because of all the money. Furthermore, he seemingly developed an affinity for codeine during his holdout.

There are many quote regarding the downside of having too much idle time. I personally like the following one from Charles Kingsley.

Thank God every morning when you get up, that you have something to do that day which must be done, whether you like it or not. Being forced to work and forced to do your best will breed in you temperance and self-control, diligence and strength of will, cheerfulness and content, and a hundred virtues which the idle never know.

Raiders’ coach Lane Kiffin apparently didn’t share Kingsley’s concern for idle item. Instead, he thought of it as a “vacation” for his presumed franchise quarterback. Kiffin even cited David Carr as a reason to let a top quarterback prospect watch and learn from the sidelines. With Russell still on “vacation” at the beginning of the season, Kiffin chose Josh McNown as the team’s starter. McNown came to the Raiders along with “Fat Mike” Williams when both players didn’t pan out with the Lions. I repeat, they didn’t pan out with the Lions!

After McNown went 2-7 as the starter, Kiffin replaced him with Daunte Culpepper. Unfortunately, Randy Moss had been traded to the Patriots in the off-season so Culpepper didn’t have his favorite weapon from their Minnesota days. Consequently, Culpepper did well to achieve a 2-4 record. Running out of options, Kiffin finally started Russell in the final game of the year. Despite losing the game, Russell completed 74% of his passes for 224 yards and had 1 touchdown and 1 interception.

Likely because of the team’s $30 million investment in him, Russell began the 2008 season as Oakland’s starter. Kiffin lost his job after a 1-3 start to the season, but Russell survived. Perhaps reverting back to his time as a game manager at LSU, Russell threw for 2,400 yards with 13 touchdowns and 8 interceptions. Unfortunately, 2008 #4 overall pick Darren McFadden didn’t help as he only rushed for 500 yards and 4 touchdowns. Without either a potent passing or rushing attack, the Raiders couldn’t outscore many opponents. In fact, Oakland finished 29th out of 32 teams on offense with 16.4 points per game. As a result, its 5-11 record could have been a lot worse.

Russell began the 2009 season as the Raiders’ starting quarterback. However, he lost his job after a 2-7 start. During the year, Russell regressed by completing fewer than 50% of his passes and throwing almost four times more interceptions than touchdowns (11 INTs vs 3 TDs). Head Coach Tom Cable cared more about winning than the $30 million sunk cost in a busted quarterback, so he justifiably benched Russell. Having more idle time, Russell seemingly lost all motivation to stay in shape.

Despite their financial investment, the Raiders finally cut Russell before the 2010 season due to his diminished capabilities. In polite layman’s terms, he was slow and overweight. Based on his entire “body” of work, Russell earned his title as an all-time bust.

To start, Russell was as accomplished college football superstar who failed in the NFL as a #1 overall pick. Furthermore, the Raiders passed up on a lot of Hall of Fame caliber players when taking him. Of note, wide receiver Calvin Johnson went #2, offensive tackle Joe Thomas went #3, running back Adrian Peterson went #7, and defensive back Darrelle Revis went #14. Arguably, each of these players has been the absolute best at his position since coming into the league. Also noteworthy, Oakland decided to take Darren McFadden with their 2008 #4 overall pick instead of Joe Flacco. The Raiders mistakenly thought they had their franchise QB, so they didn’t pursue another one.

As previously discussed, there weren’t any good quarterbacks from the 2007 Draft. However, only one of them resulted in a $30-million mistake. Overall, JaMarcus Russell justifiably ranks as the #3 NFL Draft Busts. As such, just think how bad #1 and #2 must be.