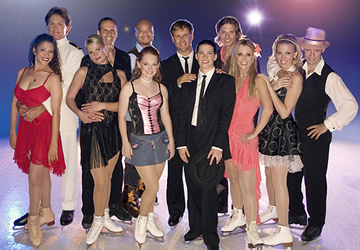 Synopsis: By airing Dancing with the Stars in the summer of 2005, ABC changed the landscape of reality TV. Of note, DWTS became the first elimination competition with “stars” as contestants. Inspired by that show’s success, Fox decided to air Skating with Celebrities several months later. With 25 seasons and over 400 episodes under its belt as of the 2017-18 television season, DWTS has proven to be a ratings powerhouse. In contrast, the ice skating version of the same show lasted for only one season and seven episodes. As a failed imitator, Skating with Celebrities earned the #10 spot as a Reality TV Bust.

Based on its typical cast, Dancing with the Stars certainly takes liberty with the definition of “stars.” From the beginning, the show has attracted D-List celebrities with an insatiable desire to remain in the spotlight. In case you doubt that assessment, the premiere season’s cast included “celebrities” such as Rachel Hunter and John O’Hurley. If you need help remembering them, you might know them better as:

O’Hurley parlayed his appearance on DWTS into a gig as the host of Family Feud. As a result, he paved the path for others willing to trade self-dignity for the chance to extend their careers by another 15 minutes. Thanks Peterman!

Given the ratings success of Dancing with the Stars, imitators soon followed. Within two months of the premiere of DWTS in June 2005, filming began for Skating with Celebrities. By simply exchanging dance shoes for ice skates, the show could have been called “Dancing with the Stars on Ice” instead. Then again, DWTS’s producers wouldn’t have reacted too well to that title.

Not wanting to mess with a proven formula, Fox’s skating competition kept with the casting of D-List celebrities. Of note, it included the following contestants.

Despite the capabilities of the professionals, the celebrities didn’t seem too comfortable on the ice.  As the first celebrity eliminated, Todd Bridges seemingly couldn’t make the transition from roller skates

According to Bridges, “Roller skating and ice skating are two different things. I found out the hard way.” Whatchu talkin’ bout Willis. My bad, that quote does make sense. I just felt the need to reference Bridge’s TV brother, Arnold Jackson.

Based on the following pictures, you probably won’t be surprised by how each couple finished in the competition.

Despite being a 4x World Champion, Browning never finished higher than 5th in the Olympics. As such, his 5th place finish could have been expected. I guess he just didn’t “have it” when the lights burned brightest.

Before watching Skating with Celebrities, I knew Full House‘s Uncle Joey came from Canada so I thought he might have some hidden skating skills. Apparently, he spent too much time hiding out with Alanis Morissette in a theater. C’mon Dave, you oughta know what happens when you go out with perverted singers. They write songs about you.

I never cared for Coulier’s partner, Nancy Kerrigan. Sure, I felt bad for her when she got attacked prior to the 1994 Olympics. However, her cries of “Why Me?” didn’t make her seem sympathetic. Furthermore, her whining on hot mics after winning a silver medal made her completely unlikable.

First, she appeared to be a sore loser. After being told that Gold Medalist Oksana Baiul needed to reapply makeup before the medal ceremony, Kerrigan lamented, “Oh, come on. So she’s going to get out here and cry again. What’s the difference?”

Then, she appeared to be ungrateful. While riding a float in a Disney parade, she moaned, “This is so corny. This is so dumb. I hate it. This is the most corny thing I’ve ever done.” Have you ever wondered why Disney only invites Super Bowl winners to one of its parks? Wonder no more.

Despite my feelings for the icy princess, I definitely fell on Team Nancy vs. Team Tonya. Since the cinematic release of I, Tonya, somehow the debate has resurfaced. Thanks to the magic of Hollywood, Tonya Harding has been portrayed as a victim instead a knowing participant in the aforementioned attack. In this case, I agree with Kerrigan that she was the one, and only, victim.

Thanks to my dad, I grew up watching a fair amount of skating. In other words, I watched it more frequently than every four years. As such, I had a reasonable basis to critique the performances. To the extent Coulier underwhelmed, Jenner proved to be a surprise. I’m not saying he was good. Rather, he skated a lot better than I thought he would.

Tai Babilonia proved to be the more interesting half of this partnership. I remember the heartbreak when her pairs partner couldn’t perform in the 1980 Olympics due to a groin injury. They went out on the ice together but he just couldn’t get through the warm ups. While most remember the poor ski jumper as the symbol of the agony of defeat, I remember the scene of Tai and Randy realizing the end of their lifelong dream to compete for the Olympic Gold.

Come to think of it, there’s an even more interesting half to this partnership.

Despite having the highest average score of all contestants on the show, Jillian Barberie finished second overall. Of note, she fell on single axel jump in the Finals. For someone who took lessons as a kid, she must have forgotten a lot. Then again, perhaps she couldn’t adjust for a change in her center of gravity.

Similar to Barberie, Kristy Swanson took skating lessons during her youth. Unlike her competition, however, Buffy didn’t have to worry about compensating for any enhancements to her frame. At the same time, she also had the benefit of a more accomplished partner.

Perhaps helping their chemistry, Swanson and Eisler’s partnership didn’t end on the ice. Despite having a pregnant wife at home, Eisler started having an affair with his celebrity partner during the filming of the show. Eventually, the scandal resulted in a divorce for him and a marriage for them.

During its seven episode run, Skating with Celebrities averaged over 11 million viewers. Those ratings would be outstanding today, but only ranked 34th for the 2005-06 television season. Still, the show didn’t get renewed for a second season.

For the most part, Dancing with the Stars [on Ice] worked . . . for one season. The producers had already scraped the bottom of the barrel to round out the cast. Still, they only found 6 contestants. Out of those six, only two could be considered minimally competent.

Despite the failure of Fox’s show, ABC must have thought it had the secret sauce. Specifically, the executives at Disney green lit Skating with the Stars during the 2010-11 television season. The show started with 11 million viewers but never got more than 4 million after the 2nd episodes.

The precipitous drop off in viewership can be explained by the following George W. Bush quote.

There’s an old saying in Tennessee — I know it’s in Texas, probably in Tennessee — that says, fool me once, shame on — shame on you. Fool me — you can’t get fooled again.

Hopefully the networks have learned the lesson and realize we can’t get fooled again. Regardless, in honor of the show that fooled us once, I select Skating with Celebrities as the #10 Reality TV Bust.