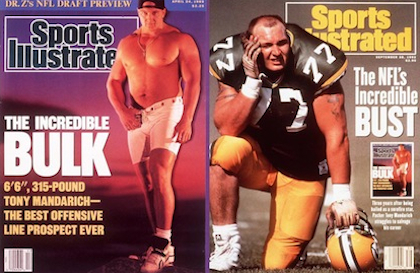 WITH PECS LIKE THAT, TONY MANDARICH ALSO HAD A TOP 10 BUST

Synopsis: In order to qualify as a Top 10 Bust, a player needs to be a complete failure. Most NFL players often mentioned as all-time busts meet this definition. However, Tony Mandarich is an exception. Compared to the roided-out Adonis before the 1989 Draft, the presumably supplement-free version was not as strong and not as fast. Regardless, he survived in the NFL for six seasons. Having played in 86 games (including 63 starts), he hung around long enough to escape being a complete failure. As such, he’s exempt from being a Top 10 Bust. However, he still deserves an Honorable Mention given all of the pre-draft hype and post-draft disappointment surrounding him.

When determining potential Top 10 Busts, I developed the following criteria as a way to eliminate less deserving candidates.

In this post, I establish the third criterion by detailing the better-than-remembered career of Tony Mandarich.

While the concept of a complete failure should be self-explanatory, apparently it’s not. To help with the distinction, I have developed an objective standard based on the statistic Weighted Average Value (WAV). Developed by Pro-Football-Reference.com, WAV encapsulates a player’s career in one statistic. Think of it as football’s version of WAR.

To define a complete failure, I have used a WAV threshold of 13. In essence, a player would need at least three years of average production to avoid being viewed as an all-time bust. From a different perspective, this threshold is 75% lower than the average WAV for an early first round pick.

I limited the pool of potential Top 10 Busts based on an objective threshold. Generally, I selected and ranked them based on objective measures as well. However, I added some subjectivity to spice things up. Specifically, I evaluated other players taken in the same draft. At the same time, I considered off-field failures since they help define a player’s failed character.

This last addition may be gratuitous, but who doesn’t like some personal controversy to humanize players. After all, many of them were put on pedestals from the time they were acne-faced (or acne-backed) teenagers. Regardless of how salacious the back story, I chose not to over-penalize sufficiently productive players.

Some view Tony Mandarich as a complete bust. Others even call him one of the all-time greatest busts. Prior to the 1989 Draft, Sports Illustrated hyped the Michigan State tackle as the “Incredible Bulk” and “The Best Offensive Line Prospect Ever.” Based on expectations, anything short of the Hall of Fame could have be considered an underachievement.

As support for SI’s assessment, Mandarich certainly had the college accolades. First, he made the first-team All-America team for the 1988 season. Second, the was named as a finalist for the Outland Trophy, which recognizes the best interior lineman). Third, he finished 6th in the Heisman voting. Since college teams went to one-way players almost 50 years ago, only three offensive linemen have finished higher than that.

I remember first hearing about Mandarich after his Herculean performance at the 1989 combine. Of note, he ran the 40-yard dash in 4.65 seconds and registered 39 reps in the 225-lb bench press. Back then, these numbers were superhuman for a lineman. As shown by the followingn photograph, Mandarich truly was a freakish physical specimen.

With the highest rating ever given to a prospect, Mandarich went to the Green Bay Packers with the 2nd overall pick. After three lackluster NFL seasons, however Sports Illustrated denounced him as “The NFL’s Incredible Bust.” By now, everyone knows that his physical attributes and college success resulted from syringes full of steroids. Clearly, he couldn’t dominate without the juice.

Despite SI’s condemnation, Mandarich cleaned himself up. After a four-year absence from the league, he enjoyed a second career with the Indianapolis Colts.

Over his entire career, Mandarich started 63 of the 86 games in which he played. In addition, he had a WAV of 28. This total exceeded the threshold for a Top 10 Bust by over 100%.

Mandarich certainly didn’t live up to the positive hype that existed before the 1989 Draft. However, he also didn’t live down to the negative hype that existed after being cut before the 1992 season. Based on his resilience and second career with the Colts, he inspired the Tony Mandarich Exemption. Specifically, the exemption applies to all players who just weren’t bad enough to be considered a Top 10 Bust.

Without this exemption, Mandarich would have been a shoo-in as a Top 10 Bust.  Of note, he had a lot of subjective bonus points. In particular, he went immediately ahead of three Hall-of-Famers: #3 pick Barry Sanders; #4 pick Derrick Thomas; and #5 pick Deion Sanders. Additionally, his personal failure as a self-admitted steroid user and pill popper contributed to his professional failure.

I reserved spots on my Top 10 Bust list for the worst of the worst. As such, I couldn’t select him with a good conscience. With a reasonably productive second half to his career, he just doesn’t meet the definition. Instead, I honored with with an exemption that applies to all players who surpassed a minimum production threshold.