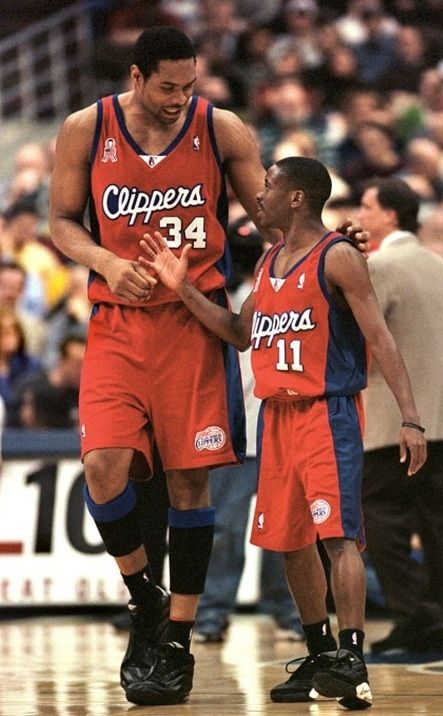 WHICH PLAYER WOULD YOU TAKE, MICHAEL OLOWOKANDI OR EARL BOYKINS?

Synopsis: The two players in the featured image are Michael Olowokandi (the #1 overall draft pick in 1998) and Earl Boykins (an undrafted free agent in 1999). As a 7-footer, Olowokandi scored 4,135 points and made almost $38 million in his NBA career. Only 5’3″, Earl Boykins scored 5,791 points and made approximately $16.5 million in his NBA career. Based on these figures:

Lessons learned: 1) Boykins was a better scorer inch-for-inch; 2) Boykins scored more points per dollar earned; and 3) NBA players get paid a lot of money. While this comparison might be amusing, it doesn’t form a legitimate basis to declare Olowokandi a bust. Instead, this post will evaluate Olowokandi’s career to determine whether or not such a claim is valid.

As an underachieving former #1 overall draft pick, Michael Olowokandi is often considered an all-time bust. The fact that he was selected before Antawn Jamison, Vince Carter, Dirk Nowitzki, and Paul Pierce makes him worthy of being one of the all-time worst draft picks. However, with over 4,000 points and 3,000 rebounds during his 500-game NBA career, Olowokandi was too productive to be considered a Top 10 Bust. Then again, these totals were not high enough (especially in light of the careers of the previously named future Hall of Famers) to avoid getting an Honorable Mention.

Despite being 7′ tall, Michael Olowokandi was not highly recruited coming out of high school. Supposedly, he only started to play “organised” basketball at the age of 16 so didn’t show up on the radar screen of any major college. Furthermore, he grew up in London, England so it would have been hard even if he started playing sooner. Regardless, I’m surprised that John Thompson didn’t track him down and recruit him to become the next big man to star at Georgetown after Patrick Ewing, Dikembe Mutombo, Alonzo Mourning, and Othella Harrington. Without any other options, Olowokandi called up Pacific to accept him and let him play on the basketball team. Even without a scholarship, he decided to go.

Before writing this post, I knew only one fact about Pacific. Specifically, I only knew that Olowokandi went there. I couldn’t have told you the school’s official name, which is The University of the Pacific. I couldn’t have told you the name of even one other famous alumnus. Presumably, Pete Carroll graduated from there. I couldn’t have told you where it is located. FYI, it’s in Stockton, California (which is about 1 hour south of Sacramento). Based on the school’s name, I would have guessed it was on the Pacific coast in Southern California. How much do you want to bet that Olowokandi did too? After all, Pacific hadn’t made the NCAA tournament since 1979 so he wasn’t going there for its basketball tradition.

I think Olowokandi may have been duped based on a conversation I had with some college students who were recruited from Ireland to play at soccer at Cleveland State University. Three months into a particularly cold and snowy winter (which says a lot for Cleveland), I ran into several players from the team at an Irish pub and asked them how they ended up in such a fine city. To their credit, they blamed their own stupidity believing that pictures from a college brochure were actually representative of Cleveland. As if right on cue, a chilling breeze filled the bar as the front door opened. Covered in snow from his 10-minute walk, one of their teammates walked in and simply exclaimed, “F#ck Cleveland!” I still laugh thinking about that moment.

UNIVERSITY OF THE PACIFIC TIGERS – IMPACT OF MICHAEL OLOWOKANDI

Not surprisingly, the team’s improvement can be seen in Olowokandi’s individuals statistics. Despite starting out as a raw player with limited basketball knowledge, Olowokandi was a quick study and improved steadily during his three years at Pacific.

As shown by the previous table, Olowokandi had an incredible junior year. Specifically, he averaged approximately 22 points, 11 rebounds, and three blocks per game while shooting over 60% from the floor. He finished the 1997-98 season ranked as an NCAA-leader in rebounds (3rd), blocks (7th), points (7th), and win shares (2nd). To summarize, Olowokandi’s key attributes going into the 1998 NBA Draft included:

Based on this summary, it’s understandable why he left school early and became the 1st overall pick in the 1998 draft. Then again, once you see who else was available that year, you’ll realize that the Clippers (who had the #1 pick) made a big, big mistake. In fact, the mistake was so big that I ranked Olowokandi as the #3 worst draft pick in NBA history.

With only 2.5 win shares, Olowokandi has been the 2nd least valuable #1 overall draft pick from the last 40 years. That fact combined with the fact that four players selected behind him each scored at least 20,000 points (the only draft class in NBA history with four such players) should make him a shoo-in for a Top 10 Bust, right? Actually, not quite.

As mentioned previously, the number of win shares is the best available statistic to summarize most players’ careers, but it lacks robustness because it over-penalizes players on really bad teams and over-rewards players on really good teams. As a member of the pitiful Los Angeles Clippers from 1998-2003, Olowokandi contributions were not appropriately reflected in his win share total.

Despite averaging 9.9 points, 8.0 rebounds and 1.6 blocks per game during his five seasons with the Clippers, Olowokandi was unable to generate a positive win share total. In contrast, Joakim Noah’s had similar production with 8.9 points, 8.6 rebounds, and 1.3 blocks per game during his first five seasons with the Bulls, but he was able to amass over 30 win shares. The significant disparity in their win share totals can be explained by the difference in wins by their respective teams. In particular, the Clippers won the equivalent of 28 games per year while the Bulls won the equivalent of 48 games per year. Perhaps it’s unreasonable to give Olowokandi credit for playing on a team as good as the Bulls, but it’s also unfair to punish him for playing on a team that was as bad as the Clippers. Assuming Olowokandi played for just a mediocre team, he would have picked up at least 15 win shares during those years, which would have qualified him for the Sam Bowie Exemption (i.e. too productive to be considered a Top 10 Bust).

Arguably, Olowokandi also could have qualified for the Greg Oden Exemption (i.e. having a career cut short by one or more injuries). After missing only seven games during his first four seasons, Olowokandi missed 197 games during his last four seasons. In essence, he missed almost as many games as he played during the second half of his career. Similar to many big men who experience physical problems after a few years in the league, Olowokandi started to have serious knee problems before the 2002-03 season when he missed all of training camp with tendinitis. Regardless, he managed to put up career highs of 12.3 points, 9.1 rebounds, 2.2 blocks per games before his season was cut short after playing in only 36 games. Despite undergoing arthroscopic surgery on his left knee, Olowokandi still was offered a 3-year, $16.2 million contract from the Minnesota Timberwolves during the off-season.

While the Timberwolves were expecting to get a player like Joakim Noah, they ended up getting a player like Jon Koncak or Joe Kliene (see my post regarding “The Jo.K.ers” if you’re unfamiliar with either player). Specifically, Olowokandi’s production of approximately 10 points and eight rebounds per game with the Clipppers. declined to approximately six points and five rebounds per game with the Timberwolves. Before moving on, I would be remiss not to share my favorite story from Olowokandi’s time in Minnesota. Apparently, the Kandi Man was unwilling to leave a bar after Semisonic’s anthem was pumped through the loudspeakers.

Despite any encouragement from the lyrics, he didn’t leave the bar so the cops were called and he had to be tasered twice before being subdued. After being traded shortly thereafter, he had to think about different lyrics from the same song.

Unfortunately, his next stop with the Celtics (i.e. another new beginning) was even worse as his production fell to approximately two points and two rebounds per game. After only 40 games in Bean Town, Olowokandi’s NBA career was over. I’ve already established in a previous post why Olowokandi should be considered one of the all-time worst NBA Draft picks, but he just wasn’t bad enough to be considered a Top 10 Bust. While he arguably deserved the Greg Oden Exemption for being injured, he doesn’t need it because his career totals of over 4,100 points and 3,400 rebounds just wasn’t bad enough. Regardless, he was bad enough as a #1 overall pick to have earned an Honorable Mention.