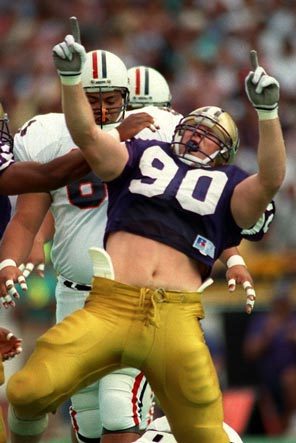 SORRY, WRONG PICTURE. THIS ONE BETTER REFLECTS THE NFL CAREER OF STEVE EMTMAN

Synopsis: As a #1 overall pick with a disappointing NFL career, Steve Emtman often gets mentioned as an all-time bust. I can’t refute the first part of that sentence, but the second part ignores the impact that injuries had on his career. In particular, Emtman suffered season-ending injuries in each of his first three years in the league. The 1991 Lombardi Award winner clearly didn’t live up to his potential, but I can’t justify calling him a bust. In this post, I establish the Steve Emtman Exemption as an Top 10 Bust exclusion for injured players. Furthermore, I discuss the use of it for oft-injured teammate Trev Alberts.

When determining potential Top 10 Busts, I developed the following criteria as a way to eliminate less deserving candidates.

In this post, I establish the fourth criterion by detailing the injury-plagued careers of Steve Emtman and Trev Alberts. Of note, the exemption could have been named after either player, but Emtman came first so he “earned” the naming rights.

In the early 1990s, the Indianapolis Colts wasted two early first round draft picks on college superstars who never lived up to expectations.

Despite these accolades, neither player lived up to the expectations that came with winning those awards. Instead, they performed poorly as as professionals.

Clearly, both Emtman and Alberts underperformed in the NFL to the point of being bust-worthy. Furthermore, their bust status escalates when compared to other players from their respective drafts.

At this point, the only discussion should be which spot each player deserves as a Top 10 Bust, right? Upon further review, both Emtman and Albert had legitimate excuses. Unlike other college superstars who just couldn’t compete at the next level, both players had careers doomed by on-field injuries.

To start, Emtman’s rookie year ended after nine games when he tore the anterior cruciate ligament (ACL) in his left knee. His second season lasted only five games before he tore the ACL, MCL (medial collateral ligament), and patella tendon in his right knee. Emtman became the first player to return to the NFL after recovering from a torn patella tendon, but his return was short-lived. In particular, he suffered a bulging disk in his neck from a collision with a teammate in his first game back. When the pain didn’t subside after a few games, he underwent season-ending surgery for the third time in three years. Emtman returned and played for three more seasons, but never became the player everyone thought he would be.

With a career also riddled by injury, Alberts retired after only three NFL seasons. Specifically, his career ended after undergoing right shoulder reconstruction surgery on the same shoulder he dislocated during college. Before calling it quits, Alberts’ injury dossier included the following.

Alberts also suffered at least one concussion, but no one in the NFL cared about concussions back then so I excluded it from the list.

Getting injured in the NFL is not a question of “if,” but “when.” I’m sure both Emtman and Alberts had pain tolerance thresholds that cannot be questioned. Unfortunately, the pain impacted their ability to compete on the field. Furthermore, their bodies couldn’t survive more than a few years in the league. Due to their numerous injuries, I granted them an exemption from the Top 10 Bust countdown. In honor of the earlier draft pick, I established the Steve Emtman Exemption for the benefit of any similarly injured player.

3 thoughts on “Steve Emtman Exemption (Too Injured To Play)”