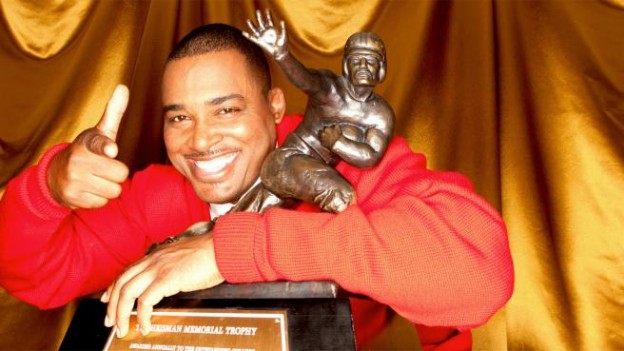 Synopsis: With 4,700 yards and 46 touchdowns as the quarterback for the Houston Cougars, Andre Ware deservedly won the 1989 Heisman Trophy. In contrast, he categorically failed in the NFL with career totals of 1,100 yards and five touchdowns. Following a string of successful Heisman winners from 1985-1988 (e.g. Bo Jackson, Barry Sanders), Andre Ware served as the winner who reversed the trend for the next five years (e.g. Ty Detmer, Gino Torretta, Rashaan Salaam). The following post shows that Ware’s falloff from college to the pros qualifies him as a bust. However, he only started six NFL games so he never really got a fair shot. As such, he earned a T10B Honorable Mention instead of making the actual countdown.

In the late 1980s and early 1990s, two different quarterbacks shattered all sorts of NCAA passing records under the Run & Shoot offense at the University of Houston. The first, Andre Ware, threw for 7,206 yards with 71 touchdowns and 23 touchdowns from 1988 to 1989. The second, David Klingler, threw for 8,528 yards with 83 touchdowns and 37 interceptions from 1990 to 1991. Despite these lofty totals, neither QB translated his college success to the next level.

After throwing for 4,699 yards and 46 touchdowns, Ware won the 1989 Heisman Trophy. That season, he set an NCAA record for passing yards and fell two TDs short of BYU QB Jim McMahon’s touchdown record. With these impressive results, Ware decided to forgo his senior year and declare for the 1990 NFL Draft. As a bona fide superstar in college, Ware went 7th overall to the Detroit Lions.

Despite his college success, Ware had a hard time getting into NFL games. During his four-year career with the Lions, he unsuccessfully battled for the starting job against Rodney Peete and Erik Kramer. For reference, the Lions had taken Peete in the 6th round of the 1989 Draft and signed Kramer after a short stint in the Canadian Football League. When compared to the quarterbacks on his team or other quarterbacks from his draft class, Ware fared poorly.

Interestingly, Ware had the same number of rushing yards as Kramer despite having 90% fewer starts.

Surprisingly, Ware only started six games during his entire career with the Lions. In contrast, Peete started 39 games and Kramer started 15 games during the same time span. Despite averaging less than 160 passing yards and one touchdown per start, Peete somehow started almost 100 games and survived 17 years in the league. Yet, Ware somehow only got six starts.

Staying with the Hollywood theme, Kramer could be described best as the real-life version of a football player portrayed by Keanu Reeves. In case you’re stuck, think Shane Falco from The Replacements, not Johnny Utah from Point Break. In particular, Kramer’s only experience in the NFL prior to playing for Detriot was as a replacement player during the 1987 strike.

Kramer had better per game averages and a higher TD/INT ratio than Peete. However, the former scab had one incredible season which skews the results. While playing for Chicago during the 1995 season, Kramer threw for 3,800 yards with 29 touchdowns and only 10 interceptions. Excluding that season, he never threw more than 14 touchdowns in any season and his career TD/INT ratio would fall below one.

In retrospect, the Lions’ rotating quarterback philosophy probably did more harm than good. Heck, just ask any fan of the Cleveland Browns from the last decade about this strategy.

For a Detroit Free Press article in November 1992, Mitch Albom, wrote about the Lions’ unstable quarterback situation. Many of you probably know Albom from The Sports Reporters. Others might know him as the author of great books that get turned into bad movies. Regardless, he identified the core issue. Specifically, why was Ware (a #7 overall pick) on the bench given that the Lions were 2-8 with Peete as the starter.

Albom highlighted the following exchange with Lions Coach Wayne Fontes in his article.

ALBOM: Do you want to try Andre [Ware]?

ALBOM: So you will?

FONTES: If I do, then we’ll go that way. And it’ll be positive. But I might not.

Wow, how’s that for commitment! Fontes initially didn’t “go that way” and started Kramer for the next three games instead. After Kramer went 1-2 as a starter and the Lions fell to 3-10 for the season, Fontes finally changed directions and decided to “try Andre.”

Over the final three games of the year, Ware went 2-1 as the starter and put up the following numbers.

While Ware’s stats weren’t outstanding, they weren’t too bad either. More importantly, he won two out of three games. For a team that finished 5-11, Ware had 40% of the wins with fewer than 20% of the starts.

Despite Ware’s strong finish to the 1992 season, Fontes went back to Peete to start the 1993 season. True to form, Fontes remained indecisive and continued to use all three quarterbacks at different points of the year. After an injury to Peete, Ware started in weeks four and five. However, he got pulled before even finishing the second game.

Peete returned as the starter after a bye week, and led the team on a four-game winning streak before losing three in a row after another bye week. In the final loss of the streak, Peete threw four picks (including a pick-six) before getting injured. Coming off the bench, Ware threw a pick of his own, but he certainly couldn’t be blamed for the loss.

Presumably unimpressed by Ware, Fontes went to Kramer as the starter for the next game. With Kramer under center, the Lions ended the regular season by going 3-1 before losing to the Packers in the playoffs. Realizing that the experiment failed, the Lions didn’t keep any of their quarterbacks after the season.

Without any other NFL teams interested in him, Ware went on to play in the Canadian Football League and NFL Europe. As the following table shows, he wasn’t any more successful in those situations either.

ANDRE WARE – STATS FROM THE CFL AND NFL EUROPE

Ware clearly underperformed as a professional. Still, he had the credentials to get more than six starts. Well, he certainly deserved a better opportunity given that he lost out to two mediocre quarterbacks.

Perhaps Ware never would have become an effective NFL quarterback. Still, he didn’t get a legitimate chance to prove it one way or the other. As a result, he has been given the Rich Campbell Exemption and only gets a T10B Honorable Mention.