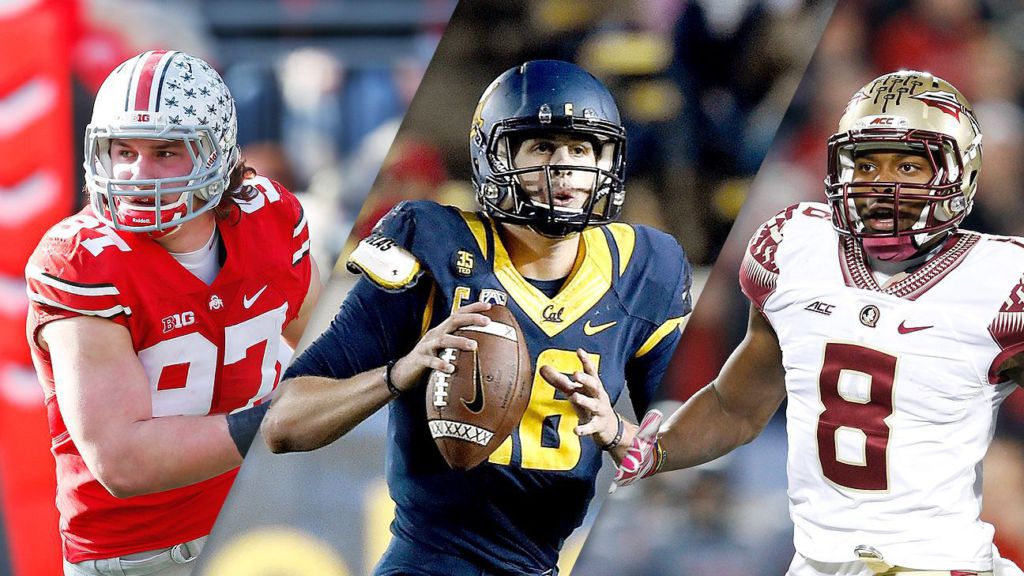 Synopsis:  With only a couple days to go before the start of the NFL season, I feel compelled to put a stake in the ground regarding potential 2016 NFL Draft Busts. Prior to the start of training camp this summer, I thought the most likely (although still improbable) busts included: #1 pick Jared Goff; #9 pick Leonard Floyd; and #10 pick Eli Apple. However, #3 pick Joey Bosa has become my overwhelming favorite as a potential Top 10 Bust based on his extended holdout. Jameis Winston received that same designation last year so Bosa shouldn’t be too worried. Or should he?

As admitted in my introduction, I have run out of time to identify potential busts from the 2016 NFL Draft. If I had waited last year, I might have avoided designating 2015 #1 overall pick Jameis Winston as a potential Top 10 Bust. At that time, Winston’s actions raised red flags exposed by previous “honorees.” In particular, he was turnover-prone in college and seemed to lack the maturity needed to lead an NFL team. Now, he appears to be an effective leader on his way to becoming a successful NFL quarterback.

By waiting longer than last year to announce my predictions, I have the benefit of the preseason to change my opinion. While true, I prepared much of the following analysis before the actual 2016 NFL Draft. Still, one player moved from a blip on the edge of my radar screen to the bull’s-eye over the last few weeks. As a clue, look at Lesson #7 below.

PRIOR LESSONS: HOW TO AVOID A BUST

In a previous post, I highlighted 7 Lessons from Highly Ineffective Draft Picks. In case you didn’t click the link, here they are.

Before applying these lessons to the specific players, I’ll start with a summary of the picks.

Note: I included Laremy Tunsil in the summary of top 10 overall picks. Ranked as one of the top 2 overall picks prior to the draft, Tunsil slipped for reasons disclosed later in this post.

Historically, the previous table provided a sufficient summary for any player. For instance, you get a sense of each player’s size, years of experience, and quality of experience. Now, we seem to require more data in order to gauge a player’s overall size and athleticism. Of note, the following table includes 2016 combine results for each player.

Affectionately, the combine has been referred to as a beauty pageant for potential draft picks. Based on that analogy, #5 pick Jalen Ramsey and #9 pick Leonard Floyd would have won the bathing suit competition. If entered into the Miss Universe pageant, they would represent Colombia and Venezuela.

Specifically, Ramsey and Floyd performed best at the combine relative to the other top 10 overall picks. You’re probably wondering, “Well, how did they perform relative to all combine participants?”  Lucky for you Top10Busts.com is on the job.

With a vertical leap of 39.5″, Floyd finished 10th in that category when compared to all NFL prospects. Interestingly, he would have finished 6th at the 2016 NBA combine. Nothing against basketball players, but perhaps the NFL really does have the best athletes. Then again, LeBron James is bigger, faster, and can jump higher than Floyd. So, I guess we can add linebacker to positions King James could play in the NFL.

Despite their great results at the combine, Ramsey and Floyd don’t have unblemished records. In particular, both fell off in performance during their final college seasons (Lesson 2).

Of note, Ramsey had fewer tackles, interceptions and forced fumbles in 2015 versus 2014. Before getting too concerned, I understand that it can be hard to evaluate the statistics of a defensive back because opposing quarterbacks may avoid throwing in the direction of a superior coverage player. For example, Darrelle Revis has been the best shutdown corner in the NFL over the last ten years but only has ranked in the top 10 in interceptions three times.

On the other hand, it’s much harder for an offense to avoid a linebacker like Floyd. Said differently, linebackers can’t hide from their stats.

As indicated in the previous table, Floyd regressed in sacks (from 6.0 to 4.5) and forced fumbles (from 3 to 0). In the spirit of full disclosure, I don’t remember ever watching him play in college (or the preseason for that matter). I don’t proclaim to be a scout. Instead, I look at the numbers. Based on those numbers, Floyd is on my radar screen as a potential bust.

Given that Top10Busts doesn’t have the same resources as other draft sites, I rely on the analysis of outlets such as Scout, Inc. and NFL.com when evaluating players. As detailed in the table below, most of the top 10 picks from the 2016 NFL Draft were highly rated by these other sources.

Despite my introduction to the previous table, the only player presumably unworthy of a top 10 pick was Eli Apple (Lesson 3). In particular, the Giants selected the Ohio State cornerback with its #10 overall pick despite the player’s ranking as a late 1st rounder. As such, Apple would avoid Top 10 Bust status because of the Troy Williamson Exemption. In essence, he wasn’t worthy of the high pick so he can’t be considered an all-time bust. While I don’t think Apple will fail, it’s hard to give credit to the Giants for making a pick that they could have made much lower in the draft.

More noteworthy, I included #13 overall pick Laremy Tunsil finished either #1 or #2 in all three rankings. For those of you who missed draft night, Tunsil fell out of the top 10 because of concerns about his off-field behavior. In particular, teams worried about his extracurricular activities.

2016 NFL Draft – What Not To Do Before Getting Drafted

Granted, Tunsil wasn’t the first top prospect to smoke pot. However, he pioneered getting caught while wearing an industrial-strength gas mask. Before moving on, take a look at the 3rd panel in the previous photo. I guess he couldn’t care less about his NFL career in that moment. Hey kids, don’t trust anyone with a camera.

Assuming Tunsil would have been taken as the first offensive lineman, he lost over $8 million because of his indiscretion. Regardless of his NFL career, that money is lost forever. At $8 million per hit, that pot might be the most expensive in history. To repeat, don’t trust ANYONE with a camera!

I fully understand that Tunsil violates Lesson 4 (i.e. Character Matters), but smoking pot shouldn’t fall into this category. Short of serious concerns (e.g. domestic violence), the character of an offensive lineman is up for debate anyways. After all, each lineman effectively serves as a crash-test dummy on each and every play. Point being, no sane person of good character would ever intentionally do what is asked of the position. As an aside, I believe we will look back at the NFL in 50 years and be surprised that the sport existed in the first place. Going further – Rome : USA / Gladiators : Football / Burning : Burning.

Whether in this post or others, I have addressed every top 10 overall pick but for #3 pick DE Joey Bosa, #4 pick RB Ezekiel Elliott, #6 OT Ronnie Stanley, #7 pick DE DeForest Buckner, and #8 pick OT Jack Conklin.

As a reminder, I argued last year that NFL draft analysts such as Mel Kiper Jr. underestimate the value of running backs (e.g .2015 #10 pick Todd Gurley). As such, I believe the selection of Elliott by the Cowboys makes a lot of sense.

At the same time, I argued in the same post that only 4% of all offensive linemen taken with the top 10 pick are busts. As such, I can’t argue with the selection of either Stanley or Conklin. As a caveat, Tunsil should have taken one of those two spots. In that case, Conklin arguably would have fallen to #13 instead. Regardless, I don’t think any of the three will be a bust based on the odds.

By process of elimination, I only have to address defensive ends Joey Bosa and DeForest Buckner. Since Buckner has the cover of being the second DE picked, I’ll focus on Bosa. Even before the 2016 NFL Draft, I wondered about Joey Bosa as a top 10 overall pick. In particular, I noticed that he had a dramatic drop-off in sacks and forced fumbles (Lesson 5).

After moving to Cleveland in the mid-1990s as a Yankees and Steelers fan, I became an Ohio State fan because I could do so without violating any of my previous affiliations. I remember watching Bosa dominate games during the Buckeyes’ 2014-15 championship season, but don’t remember many standout moments from last year. After looking at the previous table again, I understand why. In essence, he fell victim to Lesson 5 (i.e. he may have peaked already).

Regardless, Bosa had the highest rating of any player in the 2016 NFL Draft so what do I know. Well, I do know that players who miss a significant portion of training camp during their rookie seasons don’t fare well. Of note, #3 Top 10 Bust JaMarcus Russell and #8 Top 10 Bust Heath Shuler both sat out because of failed contract negotiations. When detailing Lesson 7 (i.e. get to camp on time), I commented that the rookie pay scale established by the NFL collective bargaining agreement made holdouts obsolete. Obviously, I was wrong.

Whether or not you support filthy rich players or filthier rich owners, a holdout should not have occurred under any situation. As a quick summary, the Chargers and Bosa disagreed on two primary issues.

Again, both sides have a reasonable argument. Regardless, each side lost in the failed negotiation because the 2016 #3 overall pick missed the entire preseason. Will the player recover from the lost time? Perhaps. Do I think he will? Absolutely not. Based on Lessons 5 and 7, Joey Bosa is my overwhelming favorite to become a bust. As the #3 pick in the 2016 NFL Draft, he’s ripe to become a Top 10 Bust.