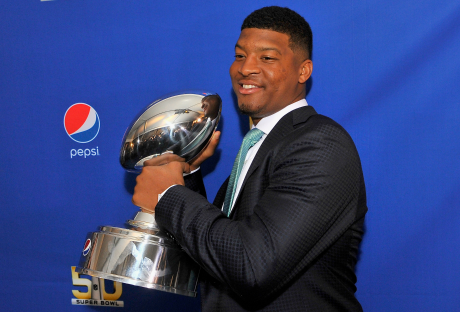 Synopsis: Prior to the 2015 NFL Draft, I identified Jameis Winston as a potential Top 10 Bust. In particular, I labeled him as an interception-prone QB lacking the maturity needed to lead an NFL franchise. Winston proved me wrong by having a productive rookie year on the field and avoiding problems off of it. Of note, he earned a spot in the Pro Bowl and became the inspirational leader of the significantly improved Buccaneers. If his career stalls for whatever reason (e.g. over confidence, decline in work ethic), Winston still may end up being a bust. For now, however, it appears that Tampa Bay made a good choice with its #1 overall pick.

After reviewing over 40 years of data, I developed the following seven lessons regarding top draft picks.

With respect to top picks from the 2015 Draft, Jameis Winston stood out as a potential bust because Lessons 4, 5 and 6 all applied to him. First, he had numerous off-the-field problems throughout college (Lesson 4). Second, he peaked after winning the 2013 Heisman Trophy as a redshirt freshman (Lesson 5). Third, only one college QB threw more interceptions than he did in 2014 (Lesson 6). I detailed all of these issues in a separate post, but I’ll repeat a few of them here.

Perhaps the biggest red flag regarding Winston going into the draft involved his character. En route to winning the Heisman and a National Championship, the former Seminole faced criminal charges regarding an alleged sexual assault from almost one year earlier. Unable to gauge the credibility of either side, a retired Florida Supreme Court Justice eventually dismissed the case. However, Winston couldn’t avoid further controversy.

Still, the player failed to grasp the seriousness of his actions. For instance, he posed over a plate of crab legs after getting drafted #1 overall by the Tampa Bay Buccaneers.

Despite all the red flags, Winston has avoided any off-the-field problems since draft night. Furthermore, he has become the spiritual leader of the Buccaneers. Hopefully, Winston continues to move forward without succumbing to old bad habits.

Going into the draft, Winston also caused concern based on the significant decline in his performance from 2013 to 2014.

* Winston won the Heisman Trophy as well as other prestigious awards (e.g. Davey O’Brien, Manning, AP Player of the Year) en route to leading Florida State to an undefeated record and the 2014 BCS national championship.

** Winston led the Seminoles to an undefeated regular season before losing to the Oregon Ducks in the semifinals of the 2015 BCS playoffs.

Most NFL prospects would love to have the type of season Winston had in 2014. However, he must have been disappointed as the reigning Heisman Trophy winner. For me, the most problematic statistics involved Winston’s total interceptions and TD/INT ratio. Since 1970, only one elite NFL quarterback (Dan Marino) has ranked in the top 10 in interceptions and had such a low TD/INT ratio while in college.

Barely three minutes into his NFL career, Winston threw a pick six to put his team down 14-0 against the Titans. Of note, the game showcased the top two picks from the 2015 Draft. As the #2 overall pick, Tennessee QB Marcus Mariotta came out of the gate strong given that he threw TD pass to culminate his first drive as a professional.

After seeing the highlight, I daydreamed about becoming the next Mel Kiper Jr. based on the strength of my prediction. Unfortunately, Winston seemed to settle down after his initial miscue. In another about-face, however, the jitters returned in a Week 4 loss to the Carolina Panthers. Specifically, he threw four interceptions, including another pick six, in that game. With seven interceptions in his first four NFL games, Winston demonstrated an inability to take care of the ball. At that point, I scheduled an appointment with my hair stylist to get ready for my head shot.

After a going 1-3 in the first four games of the year, the Buccaneers rebounded by going 5-3 in the next eight games. Winston emerged as the team’s leader during that stretch by engineering two fourth quarter comebacks and three game-winning drives. In those eight games, he had 15 total touchdowns (11 passing and four rushing) and threw only four interceptions. Of note, he tied an NFL rookie record by throwing five touchdowns (and no interceptions) during a 45-17 blowout of Philadelphia in Week 11.

With Tampa Bay sitting at 6-6 and in position to make the playoffs, I realized that I likely underestimated the Bucs’ new quarterback. Then again, Winston’s numbers fell off from there as the Bucs ended the season on a four-game losing streak. Despite his seesaw performances, Winston still finished the year with impressive totals.

Based on his production, Winston made the 2015 Pro Bowl as an alternate. Furthermore, he received the Pepsi NFL Rookie-of-the-Year Award. After only one season, he already has exceeded the downside scenario I forecasted for him. Specifically, he has eclipsed Clausen’s career production. Even if Winston doesn’t play another down in the NFL, he’s had a more productive career than #3 Bust JaMarcus Russell (the all-time worst #1 overall pick) and #9 Bust David Klingler (the “best” QB included as a Top 10 Bust).

ROOKIE SEASON FOR JAMEIS WINSTON VS. THE CAREERS OF TOP 10 BUSTS

Simply based on his rookie season, Winston has exceeded the threshold needed to rank as a Top 10 Bust. While my assessment of Winston’s downside needs to be adjusted, my assessment of his upside still may be accurate. As mentioned previously, I believe Winston has a 20% chance to match Carson Palmer. To date, Palmer has thrown for over 40,000 yards and almost 260 touchdowns. As such, Winston would have to repeat his rookie production for at least 10 years to achieve my upside target. Clearly, he has a long way to go before reaching those numbers.

Prior to 2010, no quarterback had ever thrown for over 4,000 yards in his rookie season. However, that plateau has been reached by three quarterbacks in five seasons since then. In addition to Winston, Cam Newton threw for 4,051 yards in 2011 and Andrew Luck threw for 4,374 yards in 2012. Interestingly, these three players are the last three quarterbacks taken with the #1 overall pick. Apparently, teams have been doing their homework.

Historically, only elite quarterbacks surpassed 4,000 yards in a season. Today, almost one-third of all teams have quarterbacks who reach that total. Regardless, Winston compares quite well to two of the NFL’s current elite QBs. Perhaps more impressively, they turned around the fortunes of their franchises.

Of note, each player went to a team that finished the prior season with a 2-14 record. Winston and Newton improved their teams’ win totals by four games while Luck improved his team’s win total by nine games (thanks to seven game-winning drives). Backing up their early success, Luck led the Colts to the 2015 AFC Championship Game in his third season while Newton led the Panthers to Super Bowl 50 in his fifth season. Winston certainly has his work cut out for him if he wants to keep their company.

After watching Winston perform this season, I clearly underestimated him. In particular, I incorrectly questioned his selection as the #1 overall pick. However, before I give up on my dream of replacing Mel Kiper Jr someday, I’m comforted by the draft guru’s numerous misfires of his own.

For instance,  MKJ guaranteed that Clausen would be a great NFL quarterback. Specifically, he declared, “If Jimmy Clausen is not a successful quarterback in the NFL, I’m done. That’s it. I’m out.” Well, Kiper’s still around so he must think that Clausen succeeded.

Perhaps I can ignore my downside projection for Winston just like Mel has ignored his assessment of Clausen. Sorry, now I’m sounding like a delusional, fast-talking politician. Instead, I’ll just admit my mistake and try to make up for it with better projections in the future.