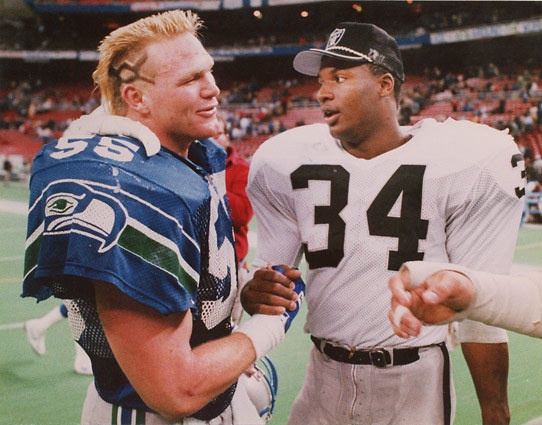 BO JACKSON VS. BRIAN “THE BOZ” BOSWORTH –  SIZZLE VS FIZZLE

Synopsis: Just like Dr. Jekyll had Mr. Hyde, Brian Bosworth had “The Boz.” Specifically, Bosworth had a larger-than-life alter-ego that couldn’t be contained. Unlike Jekyll and Hyde, however, Bosworth (the athlete) and Boz (the media sensation) weren’t split personalities. Rather, they were one and the same. Bosworth understood the importance of building a brand, and “The Boz” was his brand. The following post goes through the epic rise and fall of one of the most hyped superstars in college football history. You may not like him more by the end, but you should respect him more.

The official countdown of the Top 10 NFL Draft Busts begins with Brian “The Boz” Bosworth. Without the creation of his alter-ego, Bosworth would have been another Trev Alberts. In essence, he would have been a former Butkus Trophy winner who fell short of expectations due to a history of injuries. However, we remember Bosworth differently because he created a persona that transcended his sport.

After almost 30 years, Bosworth remains the only two-time winner of the Butkus Trophy. Even more impressively, he received the recognition after his sophomore and junior seasons. Alberts “only” won the trophy as a senior, but at least his recognition wasn’t tainted by rumors of steroids use.

With respect to these two players, you literally could say that Bosworth was like Alberts on steroids. While sitting out the 1987 Orange Bowl for a positive steroids test, The Boz worked the sidelines with a T-shirt showing what he thought of the NCAA’s decision to suspend him.

Oklahoma head coach Barry Switzer had advised Bosworth to accept the punishment and avoid negative publicity. While Bosworth may have listened, The Boz couldn’t control himself when given such a large national audience to make a statement. Today, he only would have had to send a Tweet, but this happened before Al Gore had “invented” the internet.

Even though Bosworth had one more year of eligibility, Switzer told him

Boz, you need to plan on playing pro football because your ass ain’t going to play for me anymore.

According to the coach,

It wasn’t the T-shirt. I told him not to do anything that would embarrass himself, the team or this university. He did. That’s why I kicked his ass off the team.

Bosworth had no plan to stay at Oklahoma, but he begged his way back on to the team in order to gain leverage in the upcoming draft. In retrospect, Bosworth overestimated his ability to emulate his marketing idol, Jim McMahon. After all, McMahon and The Boz shared a cover of SI as two outspoken self-promoters.

McMAHON AND THE BOZ – TWO PEAS IN A POD

During the Bears run to the 1986 Super Bowl, McMahon had gotten into trouble with NFL Commissioner Pete Rozelle for wearing an Adidas headband during a playoff game. After getting fined $5,000 for his actions, McMahon figured out a way to get back at the Commish.

Despite his amateur status, Bosworth did well financially in college. Specifically, he received envelopes of cash and got other fringe benefits like the free use of a Corvette. Still, he didn’t have the same opportunities that McMahon had as a professional athlete.

Both McMahon and The Boz were ahead of their time in realizing that their bodies were mobile billboards that could attract millions of eyeballs. Unfortunately for them (and all other players), the NFL owners and the NCAA have usurped that marketing opportunity. Perhaps it’s time to dust off Bosworth’s T-shirt to protest the NCAA’s monopolistic control over the earning potential of college players.

Bosworth may have been a lot of things (a cheat, a blowhard, an underperformer), but he certainly wasn’t an idiot. By the time he needed to declare for the 1987 Draft, the Tampa Bay Buccaneers had announced their intention to sign Vinny Testaverde with the #1 overall pick. In turn, Bosworth took a page out of John Elway’s playbook by telling the Colts, who had the #2 overall pick, that he wouldn’t play for them.

Drafted four years earlier, Elway effectively created the false impression that he would play baseball for the Yankees instead of playing for the Colts. That impression resulted in a trade with the Broncos, which still pays dividends in the Mile “High” City. In addition to leading the Broncos to two Super Bowl victories, Elway has been a very successful GM for the team. Unlike many others before him, Elway continues to elude the Peter Principle. I predict it’ll catch up to him someday, but only after he becomes Governor of Colorado.

Without another sport to fall back on, Bosworth needed the false impression that he had a college team to go back to. Switzer provided that illusion by reinstating his supposedly former player. Hoping to avoid getting picked by the Colts, Bosworth skipped the regular draft and subsequently applied for the supplemental draft after all players had been picked.

With 37:1 odds against them, the Seattle Seahawks won the Bosworth lottery and gladly forfeited their 1988 1st round pick for him. Even though the Seahawks weren’t one of Bosworth’s desired teams, money talks. Of note, the largest rookie contact ever ($11 million over 10 years) spoke to him. Too bad, Bosworth couldn’t deliver on the advertised bill of goods.

The following table shows Bosworth’s production numbers along with other defensive players connected to him.

As expected, Vinny Testaverde went to Tampa Bay with the 1st overall pick. Without Bosworth in the draft, the Colts took Cornelius Bennett at #2. Unfortunately, Bennett didn’t want to sign with the team either. Instead, he ended up in Buffalo as part of a mid-season trade that resulted in Eric Dickerson going to Indianapolis. The future HOF running back had lost a step, but still rushed for over 5,000 yards in five seasons with his new team. While not an ideal outcome, the Colts did well in salvaging the situation.

You may have noted two players from the 1988 Draft in the table. Specifically, I included Chris Spielman and Ken Norton because they both would have been available for the pick Seattle surrendered by taking Bosworth in the 1987 supplemental draft.

Even though Bosworth didn’t deliver as a professional player, he delivered as a marketing force. Before his first NFL game against the Broncos, his media company flooded the Denver market with “Ban The Boz” T-shirts. With thousands of Broncos fans wearing the shirts to the game, Bosworth made a nice profit while continuing to build his brand. Clearly, he enjoyed playing the role of the anti-hero.

The Boz made another big media splash before the Raiders/Seahawks Monday Night Football game later that season. Before that game, he proclaimed that he would shut down the Raiders’ Bo Jackson in a battle of two high profile rookies. Jackson still hadn’t proven himself as a two-sport superstar which served as the basis for the “Bo Knows” campaign. This game helped make that possible.

Unlike Elway and Bosworth, Jackson followed though on his threat not to play for the team that drafted him. Of note, he refused to sign with the Buccaneers after being taken with the #1 pick in the 1986 Draft. Supposedly, Bucs owner Hugh Culverhouse duped him into taking an unauthorized recruiting trip to Tampa Bay during the college baseball season. Upon hearing of the trip, the “National Communists Against Athletes” declared him ineligible to play college sports anymore. True to his word, Jackson didn’t sign regardless of how loudly Culverhouse’s money spoke.

As an unsigned draft pick, Jackson went back into the 1987 Draft. Not a stranger to independent thinking, Raiders owner Al Davis took Jackson in the 7th round purely as a crap shoot. Up to that point, Jackson seemed fully committed to playing professional baseball. However, his interest in football returned after one year with the Kansas City Royals. Then again, batting .235 with 21 HRs and 53 RBIs (yes, RBIs is plural for RBI) could have influenced that decision.

By the fall of 1987, Davis’ bet paid off when he lured Jackson back to the gridiron. All Davis had to do was agree to let Bo finish out each MLB season before joining the Raiders. Of course, offering Jackson a salary of $1.5 million per year for a little more than half of the team’s games also helped. As Bo said at the time, he needed a “hobby” during the baseball off-season.

Leading up to the Raiders/Seahawks MNF game, Jackson only had two professional games under his belt. He had eight carries for 45 yards against the Chargers in his first game, and 13 carries for 98 yards and two touchdowns against the Broncos in his second. As the stage was set for Bo vs. the Boz, one sizzled and one fizzled right in front of our eyes.

BO VS. BOZ – SIZZLE VS. FIZZLE

In retrospect, that game served as Bo’s coming out party. His stat line was incredible with 18 carries for 221 yards (still a MNF record) and three total touchdowns. While amassing those amazing numbers, Bo also showed a flair for greatness with a 91-run TD run and a goal-line run right through the Boz.

In the first clip, watch Bo run right by the Boz and the rest of the Seahawks on his way to running out of the stadium. In the second clip, watch Bo score after crashing into and sliding by the Boz. Either way, you should agree that Bo knew football.

Due to career-ending shoulder injuries, Bosworth arguably deserves the Steve Emtman Exemption. Specifically, I established that exemption for potential Top 10 Busts whose injuries prevented them from controlling their own destiny. Then again, I selected the superhuman Boz and not the mere mortal Bosworth for this honor. Not just a bona fide college superstar, Boz resides in the pantheon of college football greats.

I wish we could have experienced Bosworth in today’s world of non-stop social media. Instead of just being a blowhard looking for attention, he could have made a difference. Imagine him as the mouthpiece for all college football players looking to challenge the NCAA. Love him or hate him, we would all be paying attention to him.

Unlike most athletes who dread being called an all-time bust, “The Boz” probably relishes it. After all, the only thing worse for a celebrity than bad publicity is no publicity.