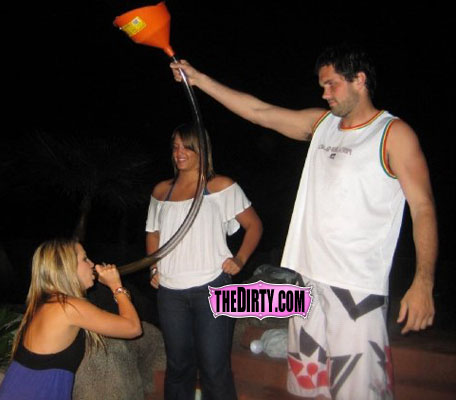 WOULD YOU WANT THIS GUY AS THE FACE OF YOUR BILLION-DOLLAR FRANCHISE? IF YOU SAID “NO,” YOU’RE NOT ALONE.

Matt Leinart knew enough not to strain his throwing arm when lifting the beer bong. However, he didn’t have the common sense to ban phones before getting drunk.

Synopsis: After winning the 2004 Heisman Trophy, USC quarterback Matt Leinart seemed poised to become the first overall pick in the 2005 NFL Draft. Despite that prediction, he decided to postpone his payday and return to college for his senior season. That decision arguably hurt his draft stock as he ended up going to the Arizona Cardinals with the 2006 #10 overall pick instead. In retrospect, he didn’t even deserve to go that high. The former Trojan threw for 4,000 yards with 15 touchdowns and 21 interceptions during his NFL career. While his on-field performance wasn’t as bad as you might remember, his well-documented off-field activities probably influenced your impression of him. Hey Johnny Football, are you listening?

USC quarterback Matt Leinart had a storybook junior year. In addition to being named AP Player of the Year, he won the Heisman Trophy and Manning Award. Furthermore, he led the Trojans to their second consecutive National Championship. Instead of leaving on a high, he decided to delay his professional career and remain in college for another year.

So why did Leinart want to stay in school? Perhaps, he wanted to continue to develop as a quarterback. Maybe he wanted to become the most decorated college football player in history, which he would have been with a 2nd Heisman and 3rd national title. Heck, he may have wanted to enjoy one more year as the B.M.O.C. Whatever the reason, I don’t second guess his decision.

Leinart put up impressive numbers as a senior, but lost the Heisman to teammate Reggie Bush, who had an even better season. The Trojans’ quarterback lost out again when a last-minute touchdown run by Vince Young gave Texas a victory against USC in the BCS title game. Even though his college career didn’t end exactly as he wanted, Leinart still had an extremely productive career at USC.

During his three seasons as a starter, Leinart put up very consistent numbers. To the extent his touchdown numbers declined over time, Reggie Bush made up the difference. Specifically, the 2005 Heisman winner rushed for 3 TDs in 2003, 6 TDs in 2004, and 16 TDs in 2005. As Bush became a focal point of USC’s offense, Leinart simply didn’t need to contribute as much.

Despite his college success, Leinart underachieved as a professional. His lack of success in the NFL becomes more apparent when compared to the other high profile quarterbacks drafted in 2005 and 2006. I included both years because Leinart likely would have been a top 10 overall pick in either draft.

Arizona’s selection of Matt Leinart in the 2006 Draft excited Cardinals Head Coach Dennis Green enough to call the player a “gift from heaven.” Green’s attitude changed though as his future franchise quarterback remained as the final 1st round holdout. Kurt Warner, Leinart’s main competition for the starting QB spot, even acknowledged the impact of holding out with the following quote.

Five years removed from his last playoff appearance and after a dismal 2-8 record with the Cardinals in 2005, Warner seemed to be on his last legs. As such, Leinart had a good chance to become the opening-day starter as a rookie. Due to his holdout, however, he wasn’t ready.

After the Cardinals began the 2006 season with a 1-3 record, Warner got pulled for the rookie. In his first start, Leinart went 22-35 for 253 yards with two touchdowns and one interception. Still, his team lost 23-20 to the Chiefs. In his second start, he went 24-42 for 232 yards with 2 TDs and no interceptions. Still, the Cardinals lost 24-23 to the Bears. Adding to the frustration, Leinart clearly outplayed Bears QB Rex Grossman, who finished the game 14-37 for 144 yards with 0 TDs, 4 INTs, and 2 lost fumbles.

Not surprisingly, Dennis Green didn’t react well to the loss. His rant in the post-game press conference gave us all a “gift from heaven.”

“THEY ARE WHO WE THOUGHT THEY WERE”

After starting his career with an 0-5 record, Leinart went 4-2 in his next 6 starts. Unfortunately, he got injured in the penultimate game of his rookie season. Despite the strong finish, the Cardinals fired Coach Green after the team’s second consecutive 5-11 record.

Leinart presumably showed enough promise to be named the starter by new Head Coach Ken Whisenhunt. However, the coach changed his mind after two lackluster games by the former Heisman winner. Whisenhunt went to a two-quarterback offense with split duties between Leinart and Warner. His experiment didn’t last long though, because Leinart suffered a season-ending collarbone injury three games later.

Leinart started 15 out of a possible 21 games to begin his career. He wasn’t particularly good in those games. At the same time, he wasn’t that bad. Certainly, it didn’t seem like he would only start another two games in his career. Then again, who thought that Warner would resuscitate his career and lead the Cardinals to a near-victory against the Steelers in Super Bowl XLIII.

MATT LEINART – NOT SO HEAVENLY

Leinart certainly didn’t help portray the image of a franchise quarterback when photos of his “party boy” antics appeared on the internet prior to the 2008 season. Whistenhunt claimed he still had confidence in his young quarterback and reaffirmed that Leinart had the starting job. Despite these claims, the party boy didn’t start one game that year. I can just imagine Arsenio Hall’s take on the matter.

Things that make you go, “Hmm.”

Clearly, Leinart made decisions which opened up his personal life to the public. As such, I would be remiss not to mention that he has a son with a former girlfriend who played basketball for USC. On its own, the story isn’t necessarily newsworthy. That is, until you know that Leinart’s baby mama also has a son with Blake Griffin.

OK, I’ll say it. How soon before those genetic lottery winners get scholarships to USC? Furthermore, which professional sport will they play?

[As of the posting of this article in late 2014, Blake Griffin had split up with his and Leinart’s baby mama. Since then he got back together with her and had another kid. All at once now, “Awww, how nice!” Generally, I wouldn’t update a post for that sort of news. However, I started to get a lot of hits on Valentine’s Day 2018 and wondered why.

Apparently, LA’s super baby mama filed a palimony suit against Griffin now that she got dumped for Kendall Jenner. In the filing, the NBA player’s jilted lover makes allegations of abandonment and embarrassment due to “public fawning.” Furthermore, it states that Griffin “cared more about the glamour of dating a Hollywood celebrity than the day-to-day responsibilities of being a father and family man.” Only in Hollywood! Regardless, it’s getting more people to my site so I’ll welcome the Extra attention.]

Let’s see if Leinart should qualify as a Top 10 Bust.

Matt Leinart threw for over 4,000 yards and had a 70.4 efficiency rating in the NFL. Furthermore, he had an 8-10 record in 18 career starts. While not great, these numbers aren’t horrendous either.

The 2006 #10 overall pick certainly didn’t live up to expectations based on his stellar college achievements. However, I believe he might have had success with a different team if given a reasonable chance. As such, I grant him the Rich Campbell Exemption from being named a Top 10 Bust. However, there’s no exemption for personal foibles so he earned a T10B Honorable Mention instead.