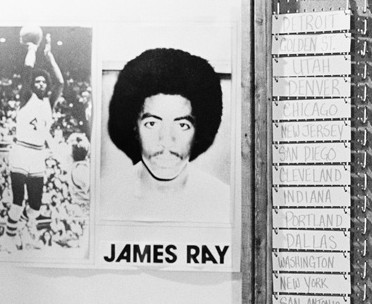 IT’S JUST NOT THE SAME WITHOUT THE EARL

Synopsis: Life couldn’t have been easy for James Earl Ray (the basketball player) growing up with that name in the South in the 1960s. After all, that name is associated most often with the assassin of Martin Luther King, Jr. While I won’t exploit that coincidence, I won’t ignore it either. After being named the Sun Belt Conference Player of the Year, Ray was taken by the Denver Nuggets with the 5th overall pick in the 1980 NBA Draft. Unfortunately, he failed to live up to expectations and tallied only 334 points and 228 rebounds in 103 career games (i.e. 3.2 ppg and 2.2 rpg). As an underperforming high draft pick, James Ray begins the countdown of Top 10 NBA Draft Busts at #10 on the list.

As a kid, I rarely was allowed to stay home from school for being sick. Therefore, my daytime television watching was limited to snow days and school break. I never considered my parents to be trendsetters, but they definitely were ahead of the curve with at least one current trend. In particular, they introduced my brothers and me to the concept of a “staycation.” For those of you who are jetsetters, it simply is a nicer way of saying, “We’re staying home during school break again because there’s no money for a vacation.” Having gone on a lot of staycations as a kid in the 1970s and 80s, I watched my fair share of reruns and cheesy game shows.

Relative to the other TV shows at the time, I enjoyed Match Game because the “celebrity” panelists pushed the envelope trying to avoid the FCC’s taboo words in creative ways. As shown by the following picture, Match Game regular Charles Nelson Riley was particularly good at it.

While the best hosts and guest stars flirted with the edge of what the FCC deemed acceptable for impressionable young minds, the contestants weren’t as adept at understanding the nuance. However, the following clip from an old Newlywed Game episode shows that the contestants still could be entertaining for completely different reasons (e.g. the willingness to humiliate themselves on national TV for a few hundred dollars). If you chose not to click on the link, it involves host Bob Eubanks asking the recent brides,”Tell me, where specifically is the weirdest place that you, personally girls, have ever gotten the urge to make whoopee [the 1970s code word for sex]?” After being flummoxed for a few seconds, one woman responds, “In the a$$.” Her answer was bleeped of course, but it was a lip reader’s delight because the producers were kind enough not to cover her mouth with some primitive graphic. If you were wondering, her husband’s answer was, “In the car.”

If you never had the fortune of seeing Match Game, the premise involved contestants trying to match the celebrities’ answers to fill-in-the-blank questions or word combinations. If I was on the show back then and given the clue, “James Earl _______,” I would have chosen between two possible answers: James Earl Jones (the voice of Darth Vader for most of you, but the actor who played Terence Mann in Field of Dreams for me) or James Earl Ray (Martin Luther King Jr.’s assassin). After discovering an underachieving player named James Earl Ray during my research, I thought about ways to exploit the unfortunate coincidence of his name. However, I was disappointed by my search for images to use in this post. First, James Earl Ray (the basketball player) didn’t get on the court much so there weren’t many pictures of him. Second, there are too many images of James Earl Ray (the racist assassin), who doesn’t deserve any misconstrued posthumous recognition. While I do believe that we tend to avoid important issues under the guise of political correctness, I don’t want to perpetuate the wrong message. At the same time, I don’t want to exclude someone as a Top 10 Bust simply because of his name. To distinguish the two, I’ll refer to the basketball player simply as James Ray.

To start, James Ray played college basketball for the Jacksonville Dolphins. Even though the school didn’t have a powerhouse basketball program, it produced Hall of Famer Artis Gilmore. At Jacksonville for two years after transferring from community college prior to the 1969-70 season, Gilmore became a 2x All-American, and averaged more than 20 points and 20 rebounds per game. The Dolphins qualified for the NCAA tournament both years and even made it the 1970 championship game (a 80-69 loss to UCLA – of course). Gilmore was so desirable that the ABA orchestrated its draft to ensure that he would go only to a team with the wherewithal to lure him away from the NBA. By offering Gilmore a guaranteed contract in excess of $2 million, the Kentucky Colonels did their part to attract the best player coming out of college. By the time the ABA “merged” with the NBA in 1976, Gilmore had won a championship as well as the league’s MVP award, and produced the greatest number of win shares in ABA history. Needless to say, Gilmore success in college and in the pros put Jacksonville on the map.

Although independent during Gilmore’s time at the school, Jacksonville joined the newly formed Sun Belt Conference prior to Ray’s 1976-77 freshman season. With conference champions earning an automatic bid into the ever-expanding NCAA tournament, schools realized the importance of aligning so that at least one of them would qualify for the year-end event. While Ray was in college, the NCAA tournament grew from 32 to 40 to 48 teams and the Sun Belt grew from 6 to 8 teams. As the winner of the 1979 Sun Belt Conference, Jacksonville qualified for the Big Dance so Ray, as its best player, was able to gain additional exposure.

Not only did Ray get better as an individual throughout his college career, but also his team got better because of his leadership. As a junior, he was named the Sun Belt Tournament MVP after leading the Dolphins to the conference title and an automatic NCAA berth. As a senior, he set a conference record with 45 points in one game, and was named the Sun Belt Player of the Year at the end of the season. Even though Jacksonville had a better record that season, the team was relegated to the NIT because it fell short in the conference tournament. Everything considered, Ray had the credentials to deserve being a high draft pick.

Eligible for the 1980 NBA Draft, Ray was taken by the Denver Nuggets with the 5th overall pick. As shown by the following table, there was one only one superstar in that draft (Hall of Famer Kevin McHale), but there were five other respectable players who scored at least 10,000 points in their careers. Of those five, three (i.e., Joe Barry Carroll, Andrew Toney, and Kiki Vandeweghe) were All Stars.

Before focusing on Ray, I’d like to use the table to clear up the misconception that Carroll was a bust. As a 1st Team All-American coming out of Purdue, Carroll attracted a lot of interest from teams with high draft picks. Eager to get him, the Warriors traded Robert Parish (who had averaged 17 points and 11 rebounds per game during the prior season) along with their 3rd overall pick for the Celtics’ 1st overall pick. By using the #3 pick to select McHale, the Celtics effectively converted their original #1 pick into two Hall of Fame players. Even though Carroll became an All Star who averaged over 20 points and eight rebounds per game during his seven years with Golden State, some people argue that he was an all-time bust for being involved in one of the worst trades in NBA history. While I won’t disagree that the trade was incredibly lopsided, I can’t accept that a player with those averages was a bust, much less an all-time bust.

Of note, if the reverse outcome of the trade occurred (i.e. Boston took Carroll while Golden State took McHale and kept Parish), Carroll likely would have been a NBA Champion playing with Bird and even a possible Hall of Famer. In turn, I don’t think Parish and McHale would have won any rings and doubt they would have been named two of the 50 Greatest Players in NBA History. Arguably, they (along with players like Bill Walton, Sam Jones, and Nate Archibald) wouldn’t be on the list today given the need to make room for all-time greats like Tim Duncan, Kobe Bryant, Dirk Nowitzki, Kevin Garnett and LeBron James. Did you notice anything that the five removed players have in common? I don’t think I have a bias against the Celtics, but perhaps my childhood emotions have taken over my subconscious.

While Vandeweghe clearly was the best player taken after Ray, there were three other players (i.e. Mike Gminski, Andrew Toney, and Mike Woodson) who also would have been much better options for the Nuggets. Interestingly, Vandeweghe refused to play for the Mavericks so he ended up being traded to the Nuggets essentially for Denver’s 1st round pick in 1981. Dallas used that pick to take Rolando Blackman, who had a comparable career to Vandeweghe (so comparable that both players had exactly 75.6 career win shares). Even though the trade for Vandeweghe allowed Denver to salvage the 1980 Draft, it couldn’t hide the fact that Ray was a bust. During his three-year career, Ray only played in approximately 40% of Denver’s games. In those games, he mostly came off the bench and only averaged three points and two points in eight minutes per game.

Going back to the table with notable players from the 1980 Draft, I included Monti Davis because he was the highest drafted person with worse stats than Ray, and he was taken 16 spots later at #21 overall. As the table shows, Davis scored three points in his two-game NBA career. In his first game, Davis had the ideal Moonlight Graham appearance by going 1-1 from the floor for two points in two minutes. For those of you who don’t understand the reference, either watch Field of Dreams or try to interpret the following still shot from the movie.

Davis’ second game, which was for a different team later in the year, may actually have been more dramatic considering that he went 0-4 from the field and 1-5 from the line to record 1 point in 10 minutes. Either way, it’s easy to focus on the negative (i.e. a 1st round draft pick who only scored 3 points in his NBA career) when the true story should be positive (i.e. a boy grew up and fulfilled his childhood dream by scoring a basket in the NBA).

If you’ve read more than one of my posts, you should know that I’m not a disillusioned optimist, but rather a sarcastic (perhaps, even cynical) realist. At the same time, I understand that sarcastic humor may not always be appropriate. While trying not to be a Debbie Downer, I believe it’s appropriate to inform you that James Ray received a lung transplant in 2008 after suffering from a rare lung disease that would have been fatal otherwise. I searched but haven’t found any articles updating his status, which I hope means that he still is alive and living in anonymity with his family and close friends who truly care about him. Sports provide an enjoyable diversion from our lives, but they really should be secondary to what really matters. For as much as I might expose someone for being a “Top 10 Bust,” the reality is that the player made it to the top of the mountain. He may not have stayed at the top for long, but it was for infinitely longer than most of us will ever experience.