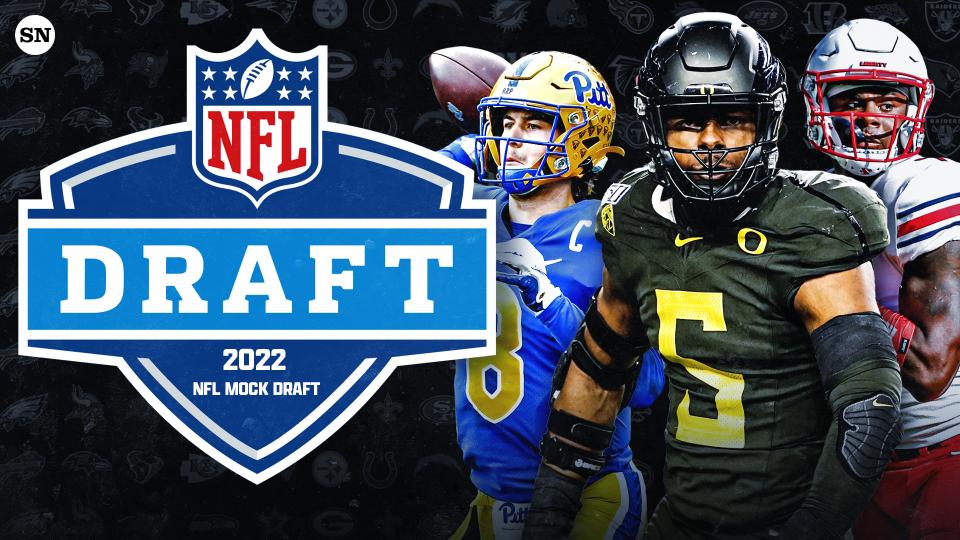 SYNOPSIS: Whether an accurate perception or not, it seems like interest the NFL draft varies directly with the number of quarterbacks mentioned as top prospects. Perhaps hoping to generate interest, the creator of the featured image for this post included two quarterbacks and one defensive end even though neither QB is likely to go with one of the top overall picks. For me, the 2022 NFL Draft lacks the same frenzy that often leads teams to go coo coo for Cocoa Pops scrambling to get a potential franchise quarterback on a cap-friendly contract. Regardless, I am excited to watch teams wheel and deal in their attempt to take advantage of a talented group of defensive ends, offensive tackles, cornerbacks, and wide receivers. With moments to spare, I offer the 2022 T10B Mock NFL Draft

For the first time since I created this site in 2014, the NFL draft lacks at least one franchise-caliber quarterback worthy of a top ten overall pick. I included one in my 2022 T10B Mock NFL Draft because bad teams often need a QB and GMs of bad teams often act irrationally when trying to make a splash or save their jobs. I had to modify my methodology to make it happen, but I’ll go with my hunch that irrational people do irrational things. Fortunately, most teams with top picks this year can act rationally and get highly rated prospects at other key positions. Of note, there are numerous edge rushers (DEs / OLBs), wide receivers, offensive tackles and cornerbacks with the potential to go very high.

Prior to seeing The Blind Side, I heard the movie presented a dramatized version of Michael Oher’s rise to the NFL as an offensive linemen. Therefore, I didn’t react too much when hearing that left tackles, who protect a right-handed quarterback’s blind side, were the second highest paid players on an NFL team. Too my surprise, that stat was factual and not a Hollywood dramatization to make a better story. Offensive tackles still rank very high today; however, the importance of passing and rules designed to protect quarterbacks has changed the value of other positions. Of note, the following table shows the range of the salaries paid to highest paid players at the following positions.

Historically, teams seemed to make selections based on filling a specific need or getting the most talented player regardless of position. Now, it seems teams also make decisions based on the economic value of the position by comparing the table above with the table below.

For instance, the spread between the 10th highest paid Edge Rusher and the 2022 #1 overall draft pick will be approximately $7 million. Assuming Aidan Hutchinson or Travon Walker produce like Cameron Jordan during their rookie contract (which is a reasonable assumption), they will create at least $28 million of economic value to their new team. In contrast, a rookie running back performing similar Leonard Fournette will offer negative economic value if taken higher than the 7th overall pick. Based on this perspective, teams now are more likely to use a high pick on a very good receiver versus the best running back.

As alluded to earlier in this post, I changed my methodology for creating the 2022 T10B Mock NFL Draft. In the past, I ranked the average position for each player in mock drafts published by sources such as CBS Sports, Walter Football, NFL.com, and Fox Sports. I usually try to include the final predictions of Mel Kiper Jr. and Todd McShay, but somehow couldn’t find them this year without paying. I find them entertaining, but not worth pulling out a credit card. I decided to change my approach this year for two primary reasons. First, I believe the Jaguars will take Georgia DE Travon Walker instead of Michigan DE Aidan Hutchinson with the #1 overall pick. Hutchinson had the lowest average draft position among the sources I considered so I needed to either change the methodology or make him the 1st pick in my mock draft. Second, I predict Liberty QB Malik Willis will go 6th overall even though his average score is borderline top 10. In order to support these selections, I tweaked my “system” by also considering the frequency with which a specific player showed up in a specific spot. Depending how I do this year, the change might be short-lived.

Without further ado, the picks.

Even though the 2022 NFL Draft lacks the same hype as recent drafts due to a lack to top QB prospects, I’m eager to see what plays out tonight. First, I’ll learn if my theory regarding the growing importance of economic value in draft selections has support or gets debunked. Second, I’ll get a sense whether I’m better off sticking to analysis or trusting my gut. Well, it’s time to find out.