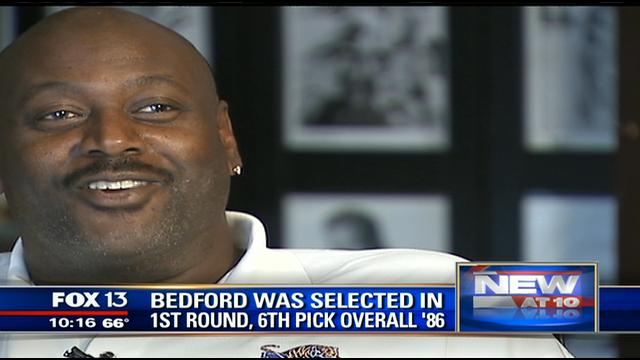 Synopsis: The 1986 NBA Draft always will be best remembered for the players who failed to live up to their potential due to problems with drugs. In particular, #2 pick Len Bias died from a drug overdose before ever playing a game in the NBA while #7 pick Roy Tarpley received not one but two lifetime bans after being named 1st Team All-Rookie and Sixth Man of the Year within his first two seasons in the league. As a #3 pick who failed to produce, Chris Washburn has received his fair share of notoriety, but #6 pick William Bedford seems to be a footnote relative to the other drug-related busts from that draft. After averaging 13 points and seven rebounds per game in college, Bedford averaged only four points and two rebounds per game in the NBA. As such, he has earned a Top 10 Bust – Honorable Mention and a separate post dedicated just to him.

Back in the day, success in college was a rite of passage for future NBA greats. In particular, NBA legends such as Bill Russell, Wilt Chamberlain, Jerry West, Oscar Robertson, Kareem Abdul-Jabbar, Magic Johnson, Larry Bird, and Michael Jordan all won or played for national championships in college before going on to even greater success in the NBA. Over the last thirty years, the résumés of the NBA’s elite players don’t necessarily include similar accomplishments. Given changes to draft eligibility requirements and the globalization of the NBA, many of the game’s greatest players over the last twenty years never went to college or left before achieving ultimate success (e.g. Kevin Garnett, Kobe Byrant, Dirk Nowitzki, LeBron James, and Kevin Durant). Furthermore, other all-time greats like Shaquille O’Neal and Tim Duncan (and future all-time great Steph Curry) never made it past the Elite Eight. Regardless, NBA teams seem to focus on the best players on the best college teams when drafting players. As a case in point, nine of the first 24 players taken in the 2015 Draft came from teams in the 2015 Final Four (i.e. four from Kentucky, three from Duke, and two from Wisconsin). While that strategy seems to work in general, it’s not fool proof.

The list of NBA failures from great college teams is as long as the list of NBA success stories. For every Anthony Davis and Derrick Rose, there’s a player like Hasheem Thabeet (#3 Top 10 Bust) and Ed O’Bannon (#4 Top 10 Bust). Lest you believe this phenomenon is new, we can look back to almost any Final Four; however, for the purposes of this post, I’ll focus on the players from the 1985 Tournament.

Almost everyone remembers #8 seed Villanova’s improbable victory over Georgetown (with Patrick Ewing) in the 1985 Finals, but most people forget that the team had to beat #1 seed Michigan (with Roy Tarpley) in the 2nd round, #5 seed Maryland (with Len Bias) in the Sweet Sixteen, #2 seed North Carolina (with Brad Daugherty) in the Elite Eight, and #2 seed Memphis (with Keith Lee and William Bradford) in the Final Four just to get to the championship game. While Ewing and Daugherty went on to have successful NBA careers (Ewing more so than Daugherty) as #1 overall picks, the other players weren’t as fortunate. I have already highlighted the underwhelming career of Keith Lee (especially considering he was selected two spots ahead of Karl Malone in the 1985 Draft), but the remaining three players (i.e. Tarpley, Bias, and Bradford) share a common connection as top 10 (actually, top seven) overall selections from the 1986 Draft who fell short of expectations because of drugs.

The unfortunate deaths of Len Bias (from a drug overdose two days after the 1986 Draft) and Roy Tarpley (presumably from years of alcohol abuse in January 2015) have been detailed extensively elsewhere (as well as by this site), but the downfall of William Bedford seems to fall below the radar despite his similar demons.

Bedford was an accomplished player on an accomplished team, so he certainly deserved consideration as an early 1st round pick. As detailed in the following table, he developed nicely and put up some impressive numbers during his three-year college career.

Of note, Bedford decided to leave Memphis State after his junior season at least in part because the school was under federal investigation for allegations of gambling and point shaving. The investigation ended without any charges being filed, but insinuations of potential gambling improprieties followed him to the Phoenix Suns, which selected him with the 6th overall pick in the 1986 Draft. Specifically, after a February game during Bedford’s rookie season, Suns’ back-up center James Edwards was overheard talking about keeping the combined score below 226 points in order to help a buddy win a $100,000 bet. Given that the combined score was 222 points (the Milwaukee Bucks won 115-107), the comment deserved further attention; however, Edwards didn’t even play in the game and the Suns shot 51% from the field and 90% from the line (26-29) so the comment more likely was an unfounded boast made after a few drinks.

Unfortunately for the Suns, the investigation uncovered a drug trafficking ring which resulted in the indictment of two former players (Mike Bratz and Garfield Heard) and three roster players (Jay Humphries, James Edwards and Grant Gondrezick). Interestingly, two other roster players (Walter Davis and William Bedford) escaped prosecution by offering testimony about their own drug use. Due to the embarrassment, the Suns waived Gondrezick after the season and traded the other four players before the end of the following season. Despite the change in scenery, Bedford continued to disappoint. In fact, he never came close to equaling his rookie numbers.

* Bedford contacted the NBA in March 1988 about having a cocaine problem and ended up missing the remainder of the 1987-88 season while in rehab. Subsequently, he was suspended for the following season because of his history of drug use.

With respect to the top seven picks from the 1986 Draft, four players had careers hampered because of drug use. In addition to Bias, Tarpley, and Bedford, Chris Washburn (the #3 pick) suffered negative consequences. As an aside, Washburn played for N.C. State in the 1985 NCAA Tournament before being ousted by St. John’s (with Chris Mullin) in the Elite Eight. As a further aside, Villanova and St. John’s are both Catholic colleges, so I’ll let you draw any inferences about the role religion played in the course of events. In case you think I’m implying something, I’m not because God couldn’t care less about the outcome of sporting events.

Assuming God doesn’t influence sporting events, He/She might frown down upon sinners like drug users. As such, the following table shows what happens to those who succumb to Satan.

Let’s face it, these players didn’t fail because God deemed that they were sinners. Rather, they failed because they couldn’t successfully compete in the NBA while using drugs. Furthermore, they failed in life because their drug and alcohol problems extended beyond the NBA.

Similar to Washburn and Tarpley, Bedford had on-going problems with drugs and/or alcohol. In 2001, Bedford was pulled over driving an SUV with 25 pounds of marijuana in it. By that time, he had already been in jail five times for a variety of drug-related charges. Due to his past (and the quantity of drugs in the car), Bedford ultimately was sentenced to 10 years in prison in 2003. With two other passengers in the vehicle at the time, too bad he didn’t have the benefit of NFL Hall-of-Famer Cris Carter’s advice to have a fall guy in his posse.

Exposed by former San Francisco 49er Chris Borland, the following clip is worth watching not only for Carter’s incredible comments, but also for Sapp’s reaction to them.

Despite Carter’s advice, I doubt anyone could be compensated enough to take the fall for Bedford’s 10-year stint in prison. Ultimately, Bedford “only” served eight years of the sentence due to time off for good behavior. After his release, he moved back to Tennessee and became the VP of Operations for the Memphis Bluff City Reign, which was an ABA team coached by former college teammate Vincent Askew. Proud of his transition back to society, Bedford granted an interview with the local FOX affiliate (a still shot from that interview was used as this post’s feature image). After reviewing some of his answers, I noticed that he still wasn’t willing to admit the full extent of his drug problems. For instance, anchor Darrell Green asked, “William, did you ever use drugs while in the NBA?” In response, Bedford said,

I think the only time I ever used drugs while in the NBA was my first year with the Pistons in 1988. I grew up here in Memphis and back in those times, we used to go to the parks, smoke a little weed, drink beer, get on the court and play. That’s how I learned to play. I played with guys I know I didn’t have any business on the court with! And that made me better.

Apparently, he seemed to forget his testimony under oath about using cocaine while with the Suns. As long as he can stay clean, who cares if he distorted the past for a local news program. After all, Brian Williams still has a job as a broadcaster despite committing the same offense.

Granted, William Bedford probably faces a daily battle with his addiction but apparently seems to be coping well. Overall, no one can know for sure whether he would have developed into a decent NBA player, but his suspension for drug use (not to mention any lost productively while using drugs) certainly couldn’t have helped. Playing while “high” might have helped him on the playgrounds of Memphis, but it certainly didn’t help him in NBA arenas. Given his disappointing career and underachievement in the league, Bedford earned an Honorable Mention as a Top 10 [Drug] Bust.