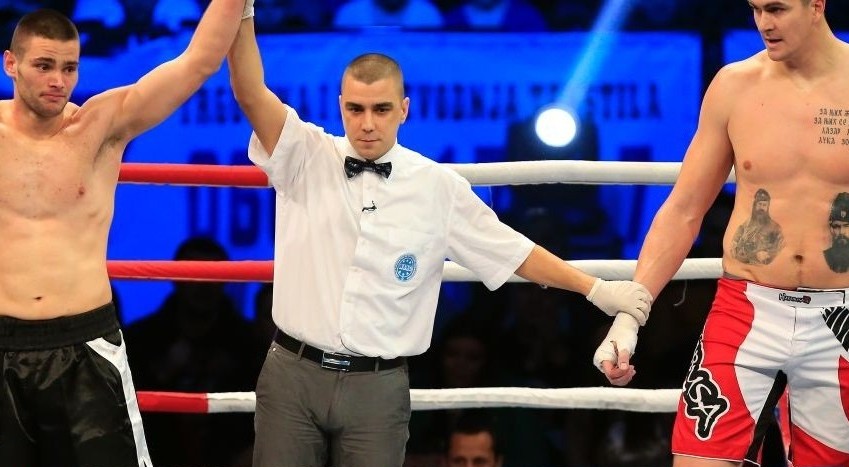 DARKO MILICIC: ONCE A LOSER, ALWAYS A LOSER.

Synopsis: With respect rankings on this site, I have tried to distinguish between absolute and relative failures. In my mind, the former describes a bust while the later describes a bad draft pick. Based on that distinction, Darko Milicic might be best described as a tweener. In retrospect, Milicic should have stayed longer in Europe prior to jumping into the NBA. However, thanks to an overzealous agent, excessive media hype, and a league willing to change its rules, he entered the draft as an underdeveloped 18-year-old. The following post explores Milicic’s disappointing career in terms of being a bust as well as a bad draft pick. As a tweener, Milicic doesn’t quite qualify as a Top 10 Bust. Yet, he still earned an Honorable Mention.

In two previous posts, I described the circumstances which resulted in Pistons President Joe Dumars selecting 2003 #2 overall pick Darko Milicic. As a quick reminder, the Cavaliers started that draft by taking LeBron James with the #1 pick. With the second pick, the Pistons could have taken Carmelo Anthony, Chris Bosh, or Dwyane Wade. However, they went with the unproven 18-year-old Serbian instead. Oops!

In my first post regarding Milicic, I commented that the Pistons made a really bad decision by overlooking three future Hall of Famers. In a separate post, I highlighted how Milicic’s underachievement could be tied to an agent who created unreasonable expectations for him, a league which declared him eligible too soon, and a team which didn’t know how to handle him. Regardless, Milicic can’t be completely absolved from his lack of success. Instead, he’s worthy of being a Top 10 Bust Honorable Mention.

To this day, I’m still unsure how Milicic could be drafted so high. It didn’t make sense to me when watching his selection on TV. After much research, it makes less sense to me today. Somehow we’re supposed to remember Milicic as a wunderkind would could hold his own against much older European professionals. If so, his stats didn’t support that claim.

At the time, the Yugoslav Basketball Association (YUBA) served as the top professional league in Yugoslavia (later Serbia and Montenegro). Meanwhile, the North European Basketball League (NEBL) included top club teams from Lithuania, Latvia, Estonia, Sweden and Finland. After a few years of expansion, the NEBL lost most of its teams to the Euroleague prior to the 2003 season. During Milicic’s one season in the NEBL, it only had four teams.

For at least some basis of comparison, I tracked down the stats of former YUBA player Nenad Krstic. As an 18-year-old during the 2001-02 season, Krstic averaged 8.1 points and 5.7 rebounds per game. Based on these numbers (as well as his 6’11” height), the New Jersey Nets took him with the 24th pick of the 2002 Draft. With similar stats the following year, Milicic somehow generated enough interest to go 22 spots earlier. Milicic’s pre-NBA numbers don’t seem overly impressive for a 1st round pick, much less the #2 overall pick.

Although limited, this information led to two observations:

Despite Milicic’s mediocre numbers, ESPN Draft Analyst Chad Ford became his biggest fan. In January 2003, Ford wrote a glowing article about Milicic that likely influenced the NBA’s decision to lower its age restriction. In turn, teams became more interested in the international phenom who caused the rule change. Given that Milicic lived 5,000 miles away, teams relied on the opinions of “draft analysts” more than they should have.

European players, like most African-American players, are stuck with stereotypes. You know the code words. Skills, fundamentals, great feel for the game. Milicic is all of these things, but he’s not only these things. He’s fast, athletic and will dunk it in your face.

While some teams accepted this viewpoint, Grizzlies GM Jerry West disagreed and repeatedly questioned reports of Milicic’s talents. When recounting those conversations, Ford referred to West as a xenophobe. Really?!? I wonder who’s the real bigot.

Whether deserved or not, Milicic went second overall. Having just lost the 2003 Eastern Conference Finals,the Detroit Pistons didn’t need a lot of help. In fact, they had 3 All-Stars in Chauncey Billups at point guard, Richard Hamilton at shooting guard, and Ben Wallace at center. Furthermore, they had two promising rookies in Tayshaun Prince at small forward and Mehmet Okur at power forward.

In contrast to the other teams with a top five pick, the Pistons had won 50 games and at least one playoff series in each of the prior two seasons. Usually, rookies benefit from a situation in which they can develop gradually. Unfortunately, the reverse situation existed for Milicic. In particular, the team played so well that he never got meaningful time on the floor. Initially, Milicic couldn’t move ahead of Okur and 8-year veteran Corliss Williamson on the depth chart. When Dumars traded for Rasheed Wallace in February 2004, Milicic went even further down on the bench. As someone who only came in during a Pistons’ blowout, Milicic picked up the nickname “The Human Victory Cigar.” Ouch, that had to hurt.

Playing against other bench players during blowouts, Milicic still couldn’t deliver. In fact, his numbers were absolutely pathetic. With a field goal percentage of 26.2%, he ranked 425th out of 442 players that season. With respect to players with at least 50 shot attempts, Milicic finished dead last. Additionally, his average of 0.1 points per game in the playoffs ranked 175th out of 189 players who entered at least one playoff game. With respect to players who got on the court in at least eight playoff games, Milicic finished dead last.

In case you’re wondering what 1.4 ppg over 34 games equates to, Milicic scored 48 points during his entire rookie season. In comparison, #3 overall pick Carmelo Anthony surpassed that total after one week in the league. Don’t worry, Milicic increased his production by almost 40% in his second season when he scored 67 points in 37 games. In comparison, Anthony needed less than two weeks as a rookie to surpass the point total from Milicic’s first two seasons. Regardless, Darko has a ring from the 2004 NBA Championship. Eat your heart out, Carmelo!

Detroit Head Coach Larry Brown’s harsh treatment of Milicic is well documented. Of note, the coach beat up his rookie in practice and in the press. After keeping Milicic on the bench for the first 23 games of the 2003-04 season, Brown finally put him into a game with less than a minute to play in a blowout loss to Cleveland. In that game, he missed a dunk and had another shot blocked. I guess that’s how someone shoots 26% from the floor for a season. When asked about his rookie’s performance, Brown responded, “I wanted to see if he acted like he belonged. He acted like he was insulted.” Needless to say, Milicic didn’t help his cause to change Brown’s opinion.

Given the Pistons’ success, one could justify Brown’s treatment of Milicic as sacrificing an individual for the benefit of the team. Who knows? Perhaps Brown really tried to help Milicic toughen up and become the best player he could be. Then again, his teammates seemed to disagree.

Despite a title and another Finals appearance, Dumars fired Brown due to rumors about his coach’s search for greener pastures. With Brown gone, players opened up and publicly challenged their former coach’s approach. In an interview with WXYT in Detroit, Chauncey Billups offered the following quote.

He [Brown] tore the kid’s confidence apart too much, and it was tough for him to recover. … With (new coach) Flip (Saunders) there, maybe it’s different. (Brown) beat him up too much, man, to where he could never recover.

DARKO MILICIC – WORTH AN EXTENSION?

Milicic only scored 115 total points in his first two years in the league. Yet, the Pistons still exercised its option to pick up the 4th year of his rookie contract. As a result, his original contract increased from $11.6 to $16.8 million. In comparison, Portland picked up Greg Oden’s fourth year for $6.8 million after he had scored 773 points during two injury-plagued seasons. Based on these numbers, Milicic earned an extra $150,000 while Oden earned an extra $90,000 per point scored. Apparently, teams have a hard time understanding the concept of a sunk cost.

Despite the front office’s ongoing commitment, the new coach didn’t think Milicic deserved any more playing time than the old one. In fact, Milicic’s playing time decreased from 7 minutes to 5 1/2 minutes per game from his second to third season. To Dumars’ credit, he finally decided to cut his losses and traded Milicic to the Magic. During his time in Orlando, Milicic got more time on the court and showed the type of player he could be. With more consistent minutes, he settled in and produced similar numbers for the next seven seasons.

* Note: Career totals include 8 games with the New York Knicks and 1 game with the Boston Celtics. The individual team statistics from those games are excluded because they’re not statistically relevant.

Once Milicic got off the bench, he delivered around 7.5 points, 5.0 rebounds and 1.5 blocks in 20 minutes per game. While those numbers are not impressive for a #2 overall pick, they were good enough for Milicic to get two lucrative free agent contracts totaling over $40 million. Simply based on the fact that he signed those contracts in spite of his appalling numbers with Detroit, it’s hard to call him an all-time bust.

Earlier in this post, I compared Milicic to two other 1st round picks (Krstic and Biedrins). All three, who played against each other as 7-foot teenagers in Europe, signed meaningful free agent contracts after fulfilling their rookie deals.

While there are no losers in the group, Krstic lost out because his numbers reflect his production in the year after recovering from a torn ACL.

Prior to the injury, Krstic was averaging 16.4 points, 6.8 rebounds and 0.9 blocks per game so the injury clearly had a negative impact on his production. Assuming he could have maintained his pre-injury numbers through the end of his rookie contract, he would have been as productive as Elton Brand was before signing a 5-year deal with the Philadelphia 76ers worth $18 million per year.

As the following table shows, the three European players had fairly similar NBA careers but only one is referenced as a bust.

By simply looking at Milicic’s pre-NBA stats, I don’t think he was worthy of the 2nd overall pick; however, the “experts” thought differently (even though they now admit that their evaluation methods were flawed). As a quick aside, statistic analysis is taking over player evaluation because it works. Bringing some real world knowledge and expertise to the discussion, Billups offered his thoughts about the Pistons’ selection of Milicic for the 10th anniversary of the 2003 NBA Draft. In particular, Billups said, “If he [Dumars] had drafted either Melo or Bosh, I think maybe that whole team would still be together. We probably would have more championships down the road. But this is the NBA and things happen. But, of course, I always think about that.”

I could reasonably argue that the Pistons drafted Milicic too high or they mismanaged him to the point of making him exempt from being called a bust. Also, I could reasonably argue that he was too productive to be called an all-time bust. However, due to his poor attitude and his self-serving role in changing the NBA Draft eligibility requirements, Milicic deserves a Honorable Mention as a Top 10 Bust.