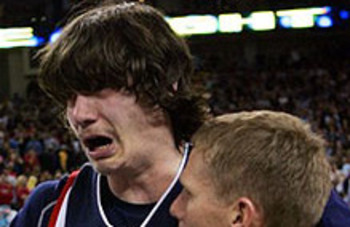 WHAT’S YOUR GUESS? IS ADAM MORRISON HAPPY OR SAD?

It might help to look at the following picture while noting, “Victory has a thousand fathers but defeat is an orphan.”

Synopsis: After finishing the 2005-06 season as the nation’s leading scorer with an average of 28 points per game (ppg), Adam Morrison was named 1st Team All-American and won both the Naismith and Wooden awards as college basketball’s most outstanding player. In addition, he had a good showing in the 2006 NCAA Tournament by leading the #3 seed Zags to the Sweet Sixteen before the team fell short in a near-upset over the #2 seed and eventual runner up UCLA Bruins. Selected by the Charlotte Bobcats as the 3rd overall pick in the 2006 Draft, Morrison had a decent rookie season with a scoring average of 12 ppg. However, he never averaged more than four ppg for a season throughout the remainder of his NBA career. Out of the league with only 1,200 points in 161 career games, Morrison earned the spot as the #2 NBA Draft Bust.

In the late 1990s and early 2000s, the Gonzaga Zags seemed to be a habitual bracket-buster with at least one upset in the NCAA Tournament every year from 1999-2001. As a #10 seed in 1999, Gonzaga beat three favorites (#7 seed Minnesota, #2 seed Stanford, and #6 seed Florida) before losing 67-62 to #1 seed UConn (the eventual Champion) in the Elite Eight. The following year, the team made the Sweet Sixteen as a #10 seed that upset both #7 seed Louisville and #2 seed St. John’s. As a #12 seed in 2001, Gonzaga upset #5 seed Virginia and beat #13 seed Indiana State en route to its third straight Sweet Sixteen. Somehow, the Zags performed well in the post season without having any legitimate star players.

Even though the Zags started to gain support from the selection committee for higher seeds in the mid-2000s, they didn’t seem to respond as well. For instance, the team lost to #10 seed Nevada despite being a #2 seed in 2004, and lost to #6 seed Texas Tech despite being a #3 seed in 2005. As the school got more recognition, its players did too. Leading the way was Adam Morrison, who became a prolific scorer during his three years at Gonzaga from 2003-06.

After a decent freshman season and strong sophomore season, Morrison truly blossomed as a junior when he led the nation in scoring with an average of 28.1 points per game. In addition, he guided the Zags to regular-season and tournament titles in the West Coast Conference, as well as a #3 seed in the 2006 NCAA Tournament. Morrison helped Gonzaga avoid a first-round upset after scoring 35 points in a 79-75 victory over #14 seed Xavier, but needed his teammates to bail him out after a 14-point performance on 5-17 shooting in a 90-80 second-round victory over #6 seed Indiana. Despite scoring 24 points in the Sweet Sixteen against #2 seed UCLA, Morrison missed his last four field goal attempts, which helped the Bruins overcome a 9-point deficit in the final three minutes. Morrison may have shown moments of weakness during the tournament, but not enough to cause concern in the eyes of scouts or analysts.

At the end of the 2005-06 season, Morrison was named 1st Team All-American, and won the Naismith and Wooden awards as college basketball’s most outstanding player. Based on his stellar college career, Morrison was selected by the Charlotte Bobcats (now Hornets) as the 3rd overall pick in the 2006 Draft. Interestingly, Michael Jordan was in charge of basketball operations when the Bobcats selected Morrison just like he was when the Wizards selected Kwame Brown with the 1st overall pick in the 2001 Draft.

Unless the Hornets’ fortunes change soon, Jordan’s legacy as a basketball executive will be tied to the disappointing NBA careers of Brown and Morrison.

Despite ending up a bust, Morrison had an auspicious start to his professional career. As the following table shows, he started out similar to Raef LaFrentz, who had a reasonably productive 10-year NBA career. LaFrentz, who was the third overall pick in 1998, finished with 39 career win shares, which was just below the median for all 2nd-5th overall picks since 1970.

Generally, Morrison played small forward while LaFrentz played center so the difference in rebounds (i.e. more for LaFrentz) and assists (i.e. more for Morrison) is not too surprising. In contrast, the minutes and points per games for both players tracked closely throughout the beginning of their careers. Including all stats, both players seem to regress similarly as they aged.

If you’re wondering how Morrison could be considered a Top 10 Bust after averaging double-digit points for four seasons, you need to realize that the time periods are months for him and years for LaFrentz. Ok, I’ll wait while you process that statement and go back to review the table again.

Go ahead, take a look again to see how fast Morrison’s career deteriorated.

Seriously, that last table is incredible when you realize that Morrison was a productive player for only four months before becoming a marginal player by the end of his rookie season (i.e. the T+5 period). Morrison missed the entire 2007-08 season after tearing his ACL in the preseason, but picked up where he left off after returning one year later (which was not a good thing). At first, I considered giving Morrison the Greg Oden Exemption for injured players; however, the following table shows that the drop-off in production began before he got hurt and simply continued after coming back.

* Traded from Charlotte Bobcats to Los Angeles (Lakers) on February 7, 2009

By winning two rings with the Lakers in 2009 and 2010, Morrison became the worst 2x champion drafted with a top 5 overall pick. Despite shooting over 50% from the floor in college, Morrison finished his NBA career with a 37% field goal percentage and never shot over 40% for a month in which he played more than six games. His career total of 1,200 points is almost twice a much as any other Top 10 Bust, but half of that total came during the first three months of his rookie year. Despite that start, he totaled -1.4 (yes, negative 1.4) win shares, which is the second lowest total for players taken with a 2nd-5th pick over the last 45 years. As an aside, #8 Bust Nikoloz Tskitishvili had the lowest total for such players with -1.6 win shares during his pathetic career.

As previously discussed, I developed a ranking of the 10 Worst NBA Draft Picks based on the careers of the players who could have been taken instead. For instance, Kwame Brown (#1 overall pick in 2001) ranked as the 6th all-time worst draft pick because he was selected before Pau Gasol (#3 overall pick), Joe Johnson (#10), Zach Randolph (#19), and Tony Parker (#28). For a while, Morrison (#3 overall pick in 2006) deserved consideration as one of the worst draft picks, but the careers of Brandon Roy (#6) and Rajon Rondo (#21) stalled after promising starts. As shown by the following table, Rudy Gay (#8) and Paul Millsap (#47) are having respectable careers, but it’s unlikely that either one will continue to the point of having a better career than Kevin Durant, which would be necessary to knock Greg Oden out of the slot for the 10th all-time worst draft pick.

ADAM MORRISON AND OTHER NOTABLE PLAYERS FROM THE  2006 NBA DRAFT

Two other players from the 2006 Draft who have been associated with the “B-word” include Andrea Bargnani and Patrick O’Bryant. Although considered an all-time bust by some sites, Bargnani has avoided that distinction by this one. On the other hand, O’Bryant wasn’t as fortunate having earning a Top 10 Bust Honorable Mention based on his unproductive NBA career.

With 19 career win shares through the 2015-16 season, Bargnani barely escapes the bottom 10% of all #1 overall picks since 1970. While that level of production doesn’t make him worthy of such a high pick, his totals of 7,900 points and 2,500 rebounds, as well as his averages of 14 points and five rebounds per game simply are too good to be considered a Top 10 Bust. Bargnani isn’t in the clear, however, because if LaMarcus Aldridge and Rudy Gay maintain their production levels for several more years and win a title or two, he might eventually find himself in the running for the countdown of Top 10 Worst Picks instead.

Whereas the case for Bargnani is straight-forward, the case for O’Bryant warrants a more extensive digression. Click here to learn more about the underachieving 7-footer from Bradley who averaged 2.1 points, 1.4 rebounds, and 0.3 assists per game during his 90-game career.

At first glance, O’Bryant might seem to be more bust-worthy than Morrison because the former Gonzaga star averaged approximately three times as many points than the former Bradley player during their respective NBA careers. Missing from that simplified analysis is the fact that Morrison averaged approximately three times as many minutes on the floor. Clearly, neither player was productive but Morrison’s lack of production was more egregious as a #3 pick than O’Bryant’s as a #9 pick. As such, O’Bryant earned an Honorable Mention while Morrison made the actual countdown of Top 10 Busts. Based on his pathetic numbers, Morrison played like a dawg. Given the speed with which his career deteriorated, he aged like one too.