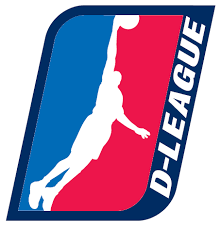 THE NBA D-LEAGUE LOGO SUPPOSEDLY WAS INSPIRED BY A COMBINATION OF PLAYERS.

YEAH, I CAN THINK OF TWO.

Synopsis: I predict that the NBA D-League eventually will become a legitimate system for NBA teams to develop talent. For now, it primarily caters to players who just can’t let go of their dreams or teams which need somewhere to stash marginal players for a few days. I’m not saying that the players don’t have any talent. Instead, they likely won’t have a meaningful career in the NBA. If the league intends to keep better players from going overseas, it’ll have to pay a lot more than the current salaries of approximately $20,000 per year. Until NBA owners commit to subsidizing the league properly, the D-League will be the basketball equivalent of Major League Lacrosse.

Playoff basketball should be considered an entirely different sport. To start, I find college basketball unwatchable during the regular season. Yet, it somehow becomes all-consuming during March Madness. Despite my presumed ignorance, I know why. Can I entice any of you with a prize for a winning bracket?

In contrast, the NBA regular season actually can be entertaining. Of course, I’m assuming a close game (or any Wednesday night with Sir Charles). Still, the NBA becomes absolutely riveting during the playoffs. Specifically, every possession matters in stark contrast to the first 43 minutes of most regular-season games.

I recently tested my theory by watching an NBA D-League playoff game between the Santa Cruz Warriors and the Oklahoma City Blue. Long story short, my theory was busted. Of note, playoff D-League basketball seems as unwatchable as regular-season college basketball. Despite my comment, I believe the D-League eventually will provide a respectable product. In that case, the league would provide a win/win/win proposition.

First, teams win by retaining the rights to players who need more time to develop. Second, players win by making enough money to avoid going overseas. Third, fans win by getting a chance to see future (and maybe rehabilitating) stars in an intimate venue.

REASON FOR THE DIGRESSION: JOE ALEXANDER

For full disclosure, I only thought about watching the D-League as part of research for my post about #7 NBA Draft Bust Joe Alexander. In particular, I learned that Alexander put up seemingly respectable numbers for the Santa Cruz Warriors earlier this year. Of note, he averaged 20 points and eight rebounds per game during his time with the team.

With respect to quantifying the effect of the faster pace of play, the D-League website offers a reasonable correction. Specifically, it discounts every player’s numbers by approximately 40% in order to provide a more reasonable estimate of potential NBA production. If it helps, imagine a conversion from kilometers to miles (i.e. multiply stats by 0.6). In addition to the site’s adjustment, I calculate that you need to apply a quality discount of another 50%.

For instance, Alexander’s 2014-15 D-League production of 20 points and eight rebounds per game gets discounted to 12 points and five rebounds per NBA game. After the 50% competition adjustment, a reasonable estimate for NBA production would be approximately 30% (i.e. 60% x 50% = 30%). To the extent that someone’s NBA production exceeds 30% of his D-League stats, he’s a rare exception.

As an illustration of inflated numbers in the D-League, the following table shows the stats for Alexander plus two other top scorers this season.

In the twilight of his career, Damien Wilkens (Gerald’s son and Dominique’s nephew) just hopes to catch on with an NBA team. Showing the inverse of the trend described earlier, Wilkens dramatically improved by going down to the D-League. In particular, he averaged six points, two rebounds and two assists per game for the Philadelphia 76ers in his last season in the NBA. In contrast, he’s averaging 20 points, six rebounds and four assists per game in the D-League this season. Multiply those averages by 30% and see what you get.

The second player, Seth Curry (Del’s son and Steph’s brother), has the highest scoring average in the D-League. Based on his production, Curry earned a 10-day contract with the Phoenix Suns earlier this year. Despite his impressive numbers with the Erie Bayhawks, he only saw eight minutes of playing time (with zero points, two rebounds, and one assist) in two games with the Suns. As you can see, even the best players in the D-League have a hard time getting on the court in the NBA.

With numbers comparable to Curry, Alexander seemingly deserved a call-up as well. Before getting such a call, however, he decided to sign a contract with Maccabi Electra of the Isreali League. As a realist, he recognized the low odds of making the NBA from the D-League. Instead, he leveraged his performance to go from a contract paying him approximately $20,000/year to one paying him approximately $20,000/month.

Currently, over one-third of all NBA players have spent at least some time in the D-League. Those players have become starters in a few cases. Still, they mostly sit on the bench waiting for a blowout before getting on the court.

In the D-League’s 14-year history, only three players have been able to become household names after spending a meaningful amount of time in the league. That exhaustive list includes Jeremy Lin, Danny Green and Hassan Whiteside. Given that each of these players has exploded onto the scene in the last three years, perhaps there’s a growing trend of players who can become legitimate contributors in the NBA. After all, that’s supposedly why the NBA created the D-League in the first place.

As the most noteworthy graduate of the D-League, Jeremy Lin will forever be known for causing Linsanity in New York City in February 2012. An undrafted free agent out of Harvard in 2010, Lin began his career by splitting time between the Golden State Warriors and the Reno Bighorns. Ineffective in the NBA as a rookie that season, Lin put up decent numbers (i.e. 18 points, six rebounds, four assists, and two steals per game) with Reno. As reflected by the following table, Lin evolved before and after his time with the Bighorns.

Clearly, Lin showed that he could produce in the D-League. Still, his transition to the NBA didn’t occur as smooth as this table suggests. In December 2011, both the Warriors and the Rockets waived him before the Knicks signed him. After a few uneventful weeks, the Knicks assigned him to the Erie Bayhawks in late January 2012.

In his one game with the Bayhawks, Lin registered a triple double with 28 points, 11 rebounds, 12 assists. Furthermore, he recorded two steals and one block. After getting recalled, Lin became an entirely different player. In his first game back, he recorded eight points, two rebounds, four assists, and one block in only six minutes of play. That performance only provided a teaser because the real magic didn’t start for another 10 days.

After 23 games of the 2011-12 season, the Knicks desperately needed a spark given its 8-15 record. In the 24th game, both Carmelo Anthony and Amar’e Stoudemire sat because of injuries. As such, no one would have expected the result. Of note, the spark came from a bench player who had tallied only 55 minutes on the court up to that point of the season. Get ready for . . .

Based on his performance, Lin took over the starting point guard job from Iman Shumpert. Including that game, Lin helped the Knicks go on an 8-1 run by averaging 25 points, four rebounds, nine assists and two steals per game. Given the injuries to Anthony and Stoudemire during that stretch, the team’s success really could be attributed to Lin.

Primarily based on that incredible stretch, Lin sign a “Linsane” contract with the Rockets for three years and over $25 million after the season. the player averaged approximately 12 points, three rebounds and five assists per game throughout his contract with the Rockets. Not the most overpaid player in the league, he never recreated the magic that led to it in the first place.

Another celebrated alumnus of the D-League is Danny Green. As the following table shows, Green’s NBA career started off slowly as a 2nd round pick of the Cleveland Cavaliers. After floating between three different D-League teams for two seasons, he eventually ended up with the San Antonio Spurs.

Since joining the Spurs in the 2011-12 season, Green consistently has averaged approximately ten points and four rebounds per game. While those numbers are commendable, Green is perhaps best known for his performance in the 2013 NBA Finals against the Miami Heat. In the first five games of that series, he went 26-38 (68%) from behind the arc to set a record for 3-point shots made in an NBA Finals series.

Helping the Spurs to a 3-2 lead, Green had been the Finals MVP up to that point of the series. Unfortunately, Ray Allen (who incidentally was the previous record holder with 22 3-pointers in the 2008 NBA Finals) kept the Heat’s hopes alive by hitting an improbable game-tying 3-pointer with only five seconds remaining in Game 6 [https://www.youtube.com/watch?v=UV6T-Am6Q64]. Over the final two games (both losses), Green went 2-12 from behind the arc so his dreamlike performance in the first five games was for naught. Regardless, he certainly was able to secure a starting spot for himself on a perennial championship-caliber team.

Seemingly out of nowhere, Hassan Whiteside has had a breakout year for the Miami Heat this season. After toiling with several teams in the NBA and D-League from 2010-13, Whiteside began the 2014-15 season with Memphis. He registered 15 points, 15 rebounds, and four blocks in 28 minutes over his last three preseason games, but the Grizzlies still cut him before the regular season started. While playing with the Iowa Energy, he was called up by Memphis because several players were out with a stomach flu. Even with a depleted squad, the Grizzlies still didn’t use him. Instead, they waived him after the game. Fortunately, Whiteside didn’t have to wait too long to get another shot because Miami was in desperate need of a back-up center.

Despite the limited sample size of only four D-League games this season, Whiteside really tore up the competition with 22 points, 15 rebounds and five blocks per game. Perhaps most impressive was Whiteside’s field goal percentage of 87% (40-46) during those games. To repeat, he made 40 and missed six shots in those four games. Since joining the Heat, he has registered 21 double-doubles (points & rebounds) and 1 triple double (14 points, 13 rebounds, and 12 blocks in 25 minutes). In addition, he has grabbed at least 20 rebounds in four games and blocked at least five shots in nine games.

According to Bill Doyle of the Worcester Telegram & Gazette, former Celtics great Bob Cousy said, “[Whiteside] is the first big guy, not Ewing, Olajuwon, [or] Shaq, who reminds me defensively and on the boards of Russell. He runs the floor well, he has excellent timing, he blocks shots and keeps them in play the way Russell did.” Cousy’s comparison may be premature, but the praise is incredible for someone who seemed to be a lost cause not that long ago.

Based on these recent examples, the D-League might actually meet the NBA’s original objective of having a system to develop future talent. Given the name of this site, I would be remiss if I didn’t make a comment about the D-League as some sort of bust. If the league never evolves beyond where it is today, it risks earning that dubious distinction. Fortunately, it’s still early.

In the relatively near future, it seems likely that all 30 NBA teams will have their own affiliates. Franchise values started at $400,000 14 years ago. Now they’re now going for upwards of $4 million. As the arbiter of what matters in sports, ESPN has started to broadcast D-League playoff games and will start showing regular season games in 2016. For all these reasons, I’ll give the NBA D-League a pass as a Top 10 Bust (for now).

One thought on “NBA D-League: Opportunity or Bust”