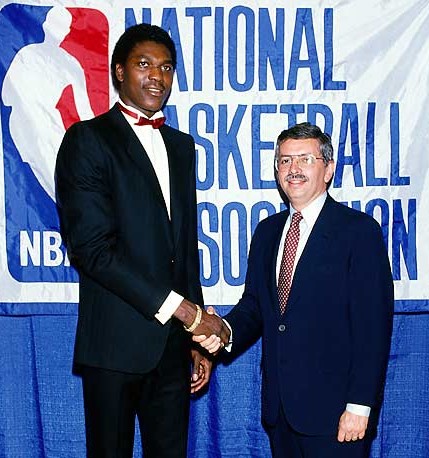 Synopsis: While the NBA generally has relied on the principle that “worst picks first” when determining draft order, the league has often altered this principle with assorted gimmicks. As described in my previous post, the NBA originally allowed teams to declare a territorial preference as a way to trump draft order. After eliminating this preference in the mid-1960s, the league began using a coin toss to award the #1 overall pick to the worst team in the East or the West. The draft order for the remaining teams was determined strictly based on the inverse order of how each team finished in the prior season regardless of division (or conference). The coin toss system was considered acceptable for almost 20 years, but NBA Commissioner David Stern decided to scrap it before his first anniversary on the job. This post will review the NBA Draft during the “Coin Toss Era.”

After enduring a shaky start in its first decade, the NBA stabilized during its second decade and even was able to establish its first expansion team in 1961. By 1966, the league was on the cusp of significant growth so it decided to eliminate territorial picks after they weren’t needed to help teams survive anymore. As the following table shows, the NBA more than doubled in its third decade by adding eight teams through expansion and four more through acquisition.

Of note during this period, the NBA was able to withstand a challenge from the ABA before ultimately “merging” with the financially weaker league in 1976. Despite the presumed “merger,” the NBA still doesn’t recognize any personal or team achievements from the ABA. Given the success that ABA greats like Julius Erving, Rick Barry, Artis Gilmore, and Dan Issel had in the NBA, it’s clear that the newer league had impressive talent. Less apparently, the ABA also had impressive teams, which had a 62-34 record against the NBA in exhibition games from 1973-75. Sure, they were exhibition games, but the embarrassment of NBA teams losing to ABA teams should have offset the thrill of ABA teams beating NBA teams. Regardless, this oversight should be fixed someday so players from that era can have their careers evaluated on a merged basis. As a start, the website Basketball-Reference.com conveniently has compiled stats both ways.

After the removal of territorial picks in 1966, the NBA allowed teams to pick in reverse order of their regular season finish with the caveat that the worse team in each division participated in a coin toss for the 1st overall pick. The difference between the 1st and 2nd overall picks wasn’t significant in 16 of 19 drafts; however, the gap between the top two players in the other three drafts was Strahanesque.

Without even looking at the numbers, you should be able to gauge the difference between the 1st and 2nd picks in these drafts. Despite their somewhat respectable careers, the three players chosen second are best remembered for who they weren’t versus who they were. Neal Walk wasn’t Kareem Abdul-Jabbar, who went on to become the most prolific scorer in NBA history while winning 6 MVPs and 6 NBA Championships. Dave Greenwood wasn’t Magic Johnson, who often is regarded as the NBA’s greatest point guard thanks to 3 MVPs and 5 NBA Championships. Unfortunately for Sam Bowie, he was sandwiched between two all-time greats so he is remember for not being Hakeem Olajuwon (who won 1 MVP and 2 NBA Championships) or Michael Jordan (who won 5 MVPs and 6 NBA Championships).

By eliminating territorial picks in 1966, the NBA avoided a potential legal battle because the Knicks and Lakers certainly would have fought in 1969 to claim the services of Jabbar, who was a high school superstar in New York City before becoming a college legend at UCLA. Whereas the Suns had a legitimate gripe for losing out on Jabbar because they finished 11 games behind the Bucks in the 1968-69 season, the Bulls didn’t necessarily deserve the right to select Magic after finishing five games ahead of the Jazz (who had traded the pick to the Lakers) in the 1978-79 season. Despite the gap between the top two players in the 1969 and 1979 drafts, the league avoided a major uproar because the system seemed to be fair. However, that sentiment changed after the Rockets landed Hall of Famers Ralph Sampson and Hakeem Olajuwon as #1 overall picks in consecutive seasons.

Sampson somehow parlayed his stellar college career (the only 3x winner of the AP College Player of the Year award) into a Basketball Hall of Fame induction even though his NBA career (20 win shares) was characterized more by “what could have been” than “what was.” Then again, Bill Walton rode the same “what if” argument to a spot on the list of the NBA’s Greatest 50 Players even though his professional career was exceeded by numerous other players (Walt Bellamy, Dominique Wilkins, and Bob Lanier to name a few).

The Rockets ended the 1982-83 season with the league’s worst record (six games worse than the Indiana Pacers – the worst team in the East), so they needed all the help they could get from the draft. After all, the Rockets had lost reigning MVP Moses Malone to the Philadelphia 76ers in free agency before the season began. For that reason, no one seemed to be bothered when the Rockets won the coin toss enabling them to select the highly desirable Sampson with the 1st overall pick. Furthermore, no one seemed to mind that the Rockets were able to select Louisville’s Rodney McCray with the 3rd overall pick as compensation for losing Malone to the Sixers. However, another favorable coin toss for the Rockets prior to the 1984 Draft was viewed as unacceptable by the only person that mattered (i.e. new NBA commissioner David Stern).

I remember reading about the intentional collapse by the Houston Rockets at the end of the 1983-84 season as the reason for the implementation of the NBA lottery. In order to confirm that recollection, I reviewed the win-loss records for the five teams with the worst records that season to see how the Rockets’ collapse compared with other teams vying for the #1 pick.

1984 – TEAMS IN CONTENTION FOR COIN TOSS (i.e. WORST RECORD IN EACH CONFERENCE)

The previous chart is completely consistent with the insinuation that both Houston and Chicago tanked in order to improve their draft positions. In particular, both teams experienced a significant decline (i.e. more than 10%) in winning percentage after the All-Star break and then an even further decline (i.e. more than 25%) during their last ten games. Of note, the other three teams (i.e. Pacers, Cavaliers, and Clippers) each had traded away their draft picks. Without the same incentive to tank, those teams actually improved their winning percentages after the All-Star break.

By tanking their seasons, the Rockets and Bulls were able to draft Olajuwon and Jordan (i.e the players most responsible for their teams’ winning all eight NBA Championships from 1991-1998). Assuming the teams ended their seasons without a major falloff in winning percentage, they likely would have ended up with Charles Barkley and Sam Perkins instead. So, did tanking help bring championships to Houston and Chicago? Don’t worry, the question was rhetorical.