Problems with the NBA Draft Lottery 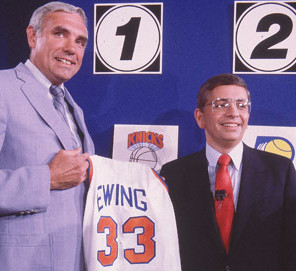 Synopsis: As described in my previous post, NBA Commissioner David Stern implemented a draft lottery in 1985 as a way to remove the implicit incentive teams had to lose games intentionally in order to improve their draft status. Clearly, Stern was a genius because the accusations of teams tanking have been removed from the game. Actually, not only have the accusations increased over the years, but also the league’s handling of the lottery system has led to conspiracy theories that the process is rigged (e.g. the bent envelope resulting in Patrick Ewing going to the Knicks). Whether fair or not, the NBA has a shoddy reputation regarding the integrity of its draft process. Perhaps more accurately, replace the “odd” from shoddy in the previous sentence with the cousin from the Adams Family (i.e. replace “odd” with “itt”). Either way, the NBA Draft seems to create enough controversy year after year for it to be considered a bust in its own right.

As his first big move as the new NBA Commissioner last year, Adam Silver forced the sale of the Clippers’ franchise because he determined that the racist comments by team owner Donald Sterling were unacceptable. Silver’s decision was applauded universally for being appropriately tough. For as embarrassed as Sterling must have been to have had his private conversations with soulmate V. Stiviano made public, he should lavish the visor model and roller skater extraordinaire with a fleet of Ferraris and Bentleys because her actions helped his trust net an extra $1 Billion (that’s right, an extra $1,000,000,000).

Ironically, Silver’s punishment turned into to a windfall because former Microsoft CEO Steve Ballmer bought the Clippers for $2 billion even though the team had been valued at only $1 billion prior to the controvery. If Ballmer based his investment on the greater fool theory, he may be S.O.L. because Sterling (one of the NBA’s greatest fools) has been banned from the NBA for life. Fortunately, Ballmer can afford to lose a billion dollars, which is a possible outcome since his team’s prospects seemed to have peaked. Perhaps he should let his players and coaches go back to using iPads because they were doing a lot better last year (even accounting for Blake Griffin’s absence over the last month). Then again, it’s all about the playoffs.

Similar to Adam Silver, David Stern made a big splash shortly after becoming the NBA Commissioner in early February 1984. From around the time Stern took over until the end of the 1983-84 season, the Rockets and Bulls both forgot how to win. In particular, the Rockets had a 20-26 record to start the season but finished by going 9 – 27, and the Bulls started with a 16-22 record but ended by going 11-33. In their final pushes for the worst possible record in each conference, they both went 1-9 in their final 10 games of the season. Overall, each team won 7 fewer games than expected based on its initial winning percentage. As a reward for their collapses, the Rockets landed Hakeem Olajuwon with the first overall pick and the Bulls got Michael Jordan with the 3rd overall pick in the 1984 Draft. While it’s hard to fault either team for its actions, Stern wasn’t pleased.

As the new sheriff in town, Stern’s first course of action was to put an end to tanking so he implemented a lottery system as a way to remove any incentive for teams to lose on purpose. Effective immediately for the 1984-85 season, each of the seven non-playoff teams had equal odds in the lottery for the #1 overall pick. With respect to teams fighting for an 8th playoff spot, the consolation prize of a 1 in 7 chance of winning in the lottery presumably wasn’t enticing enough forego a playoff appearance. To Stern’s credit, he created a system that didn’t reward losing; however, he seemed to forget that the primary goal of the draft was to help the league’s worst teams become more competitive. Then again, perhaps he knew exactly what he was doing all along.

Going into the NBA’s inaugural draft lottery, everyone knew that the winner would use its #1 pick on Georgetown All-American Patrick Ewing. Based on the old system, teams certainly would have lost on purpose to have a 50/50 chance at landing the AP College Basketball Player of the Year and future Hall of Famer. As the following table shows, the use of the lottery ended Stern’s worry about teams tanking at the end of the year. Or did it?

Even though the lottery should have removed any incentive to lose, certain teams still stumbled mightily on their way to the finish. In particular, the Clippers went 1-9 and the Knicks went 0-10 to close out the the 1984-85 season. When it appeared that the Rockets and Bulls intentionally stumbled by both going 1-9 to end the 1983-84 season, Stern revamped a process that had been used without any significant controversy for almost twenty years. I’m not naive enough to let the Rockets and Bulls off the hook, but the Clippers and Knicks showed that bad teams can go into a tailspin without even trying. I’m also not naive enough to believe that the lottery was implemented simply to get rid of tanking.

Going into the 1985 Draft, the pre-draft hype seemed to be focused on the prospect of Ewing going to the Knicks. As a big man who could dominate offensively and defensively, Ewing likely would have made any one of the seven teams relevant; however, the NBA needed New York to become relevant again after a decade-long drought in the country’s biggest market. Guess what? The Knicks, who had a 1 in 7 chance of winning the inaugural lottery, actually did! I doubt we’ll ever truly know what happened. Did someone chill the Knicks’ envelope so Stern could feel for the cold one? Did an NBA assistant walk into a bathroom with all of the envelopes and come out 90 seconds later with only one having a crease in it? I don’t mean to imply that Stern definitely rigged the lottery, because there was a 1 in 7 chance that he didn’t (or at least didn’t need to). If he did, however, he could have justified it because the league rigged the draft by allowing territorial picks to supersede the draft order for the first 20 years of its existence. Only once in those 20 years was that rule applied inconsistently, but that shouldn’t have been too controversial because it involved the rights to Wilt Chamberlain going to the Philadelphia Warriors instead of the Cincinnati Royals. Go ahead, indulge yourself because

With respect to the 1985 Draft, the Golden State Warriors had a legitimate beef with the lottery. Under the old system, they would have had a 50/50 chance for the first or second pick because they finished last in the Western Conference. Under the new system, it had a 1 in 7 chance for each of the 1st seven overall picks. As such, it had the same odds as the Atlanta Hawks, which missed the playoffs by only two games and won 12 more games than the Warriors. Unfortunately for Golden State, it was the clear loser by getting the last pick in the lottery despite having the worst overall record in the league. Fortunately, however, the team was able to use its 7th overall pick to draft future Dream Team member Chris Mullin, who was the only other Hall of Famer taken in the lottery that year. Overall, the early lottery system worked as a mechanism to remove the incentive for tanking; however, the league seemed to let the tail wag the dog because it somehow forgot that the primary purpose of the draft should have been to help bad teams get better.

Without going through all of the lotteries since then, I will highlight a few of the drafts which were interesting because they included certain marquis players (e.g. Shaq, LeBron) or led to further changes to the lottery.

Note: Chicago made the playoffs with a 30-52 record after winning 6 of its last 10 games, clearly showing that it preferred to make the playoffs rather than get a 1:7 chance to win the lottery.

For the third consecutive year, two of the worst teams in the league finished the season losing at least 9 out of their last 10 games. Whether due to the added publicity for the league or because he enjoyed controlling the outcome, Stern steadfastly moved forward with the lottery even though it didn’t seem to stop end-of-the-season collapses. The league office must have realized that the existing system didn’t adequately help the worst teams because the lottery changed in 1987 such that only the first three spots were determined by chance. As such, the worst team in the league couldn’t get lower than the 4th overall pick.

Note: Phoenix finished one game out of the Western Conference playoffs, thus showing that it really pushed to try to make the playoffs versus be in the lottery.

Note: Miami went to the playoffs in the Eastern Conference with a 38-44 record by finishing 4-6 in the final 10 games. Hopefully, it’s apparent by now that bad teams lose a lot of games. Just because they lost 8 or 9 of their final 10 games doesn’t necessarily show that they tanked; although, it doesn’t mean that they didn’t either.

Perhaps most interestingly, not one of the lottery teams traded away its first round pick in 1992 for the only time in the 30 years (i.e. 1985-2014) of the lottery.  As a parallel, you may skip a week of Powerball when the jackpot is “only” $30 million, but you make sure you play when the prize hits $300 million.

The 2003 Draft has been discussed at length (and will continue to be for decades to come) for two primary reasons: 1) LeBron James was the #1 overall pick (and potential G.O.A.T. – assuming at least two rings in Cleveland); and 2) Darko Milicic was drafted ahead of Carmelo Anthony, Chris Bosh, and Dwyane Wade. I’ve seen re-drafts done as if teams had full information of each player’s future success (just ask Chad Ford what that looks like), but I’ve never seen the 2003 Draft as presented in the previous table. In essence, consider the player each team got based on the reverse order of how it finished in the 2002-03 season (i.e. look straight down the last column as if that’s how the players were selected). As such, Milcic gets pushed down five spots (which still was too high, but would have allowed him to escape the all-time bust stigma) and not one other pick is affected. I know Stern was a genius, but the serendipity of that outcome would be too perfect, even for him.

As this trilogy of posts finally comes to end (more thankfully for me than for you), I am left with a few conclusions: