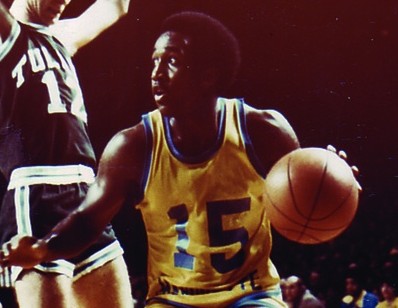 Synopsis: Butch Lee had a storied college basketball career in the mid to late 1970s. As a junior, he earned the Most Outstanding Player award after leading the Marquette Warriors to the 1977 NCAA Championship. He followed up that honor by winning numerous player-of-the-year awards as a senior. The only players to earn both distinctions encompass a Who’s Who list of all-time greats. Specifically, the list includes Jerry Lucas, Lew Alcindor, Bill Walton, David Thompson, Patrick Ewing, Christian Laettner, Shane Battier, and Anthony Davis. Unlike all of these players, Lee had an abbreviated NBA career. Regardless, I granted him an exemption from being labeled a bust because he was hindered by a bum knee.

Butch Lee was one of the most accomplished college players in NCAA history. He led his team to an NCAA Championship as a junior and won AP College Player of the Year as a senior. Still, you probably don’t know much about him because he had an abbreviated NBA career. After scoring less than 800 points as an NBA player, he has been called a bust by numerous other sites.  On the other hand, I have granted him an exemption from being called a Top 10 Bust. Of note, his ineffectiveness related to a bad knee instead of an inability to perform on the court.

As a sophomore for the 1975-76 Marquette Warriors (now Golden Eagles), Lee finished second on the team in scoring. With a 25-1 record, the team went into the 1976 NCAA Tournament as the #2 ranked team in the country. Despite that ranking, Marquette faced #1 Indiana in the regional finals because the NCAA didn’t seed teams until two years later. The Hoosiers won that game en route to the 1976 National Championship and a perfect 32-0 season.

After that season, three Marquette players  (i.e. Earl Tatum, Lloyd Walton and Bo Ellis) were invited to try out for the 1976 U.S. Olympic team. Somehow, Lee missed the cut. No one from Marquette ultimately made the team, but four players from North Carolina (Walter Davis, Phil Ford, Mitch Kupchak, and Tom LaGarde) did.

The Tar Heels entered the 1976 Tournament as the 5th ranked team in the country. However, they fell to 8th in the final poll after losing in the first round to Alabama. Shouldn’t they have done much better if four of the top twelve amateur players were on the same team? Oh, did I fail to mention that Carolina Coach Dean Smith also coached that Olympic team?

When questioned about the team’s composition, Coach Smith later argued that he only had one vote. In essence, he didn’t want to take the heat for stacking the team with his own players. Based on the wonderful sentiments shared after the recent passing of Coach Smith, I have no reason to challenge his integrity. Still, his comment may have been misguided.

Then again, maybe I am. Perhaps assistant coach Mike Krzyzewski didn’t have a say in the selection of the sole college representative on the 1992 Dream Team. Instead, Christian Laettner deserved to be picked over Shaquille O’Neal. Laettner had a better college season, but no one can convince me O’Neal wouldn’t have been a better pick. At least O’Neal might have seen actual court time instead of serving as the team’s bag boy.

In case you weren’t born yet, the 1976 Montreal Olympics are best remembered for gold-medal performances by two women.

WHO CAN FORGET HER?

AND NO MATTER HOW HARD YOU TRY, YOU CAN’T FORGET HER

Americans generally remember that the U.S. basketball team won the gold medal in Montreal without remembering any specifics. For instance, do you know who starred on the team or how many games the team won? Furthermore, do you know that the Americans narrowly escaped with a 95-94 victory over Puerto Rico.

In that game, a Puerto Rican player named Alfred scored 35 points after going 15-18 from the floor and 5-6 from the line. With his team down by one and only eight seconds left, Alfred drove the lane for the game-winning basket. Unfortunately, he got called for a charge instead. After getting fouled, Phil Ford put the game out of reach by sinking two free throws. Without the option of a 3-point shot to tie the game, Puerto Rico’s last-second basket did little but make the final margin one point instead of three.

In retrospect, the score was surprising considering that Puerto Rico lost all four of its games in the opening round. In fact, its only close game came against the U.S. Team. Perhaps it might help to know that Alfred went by the name Butch, as in Butch Lee? If you’ve never heard that rejection can be a good motivator in sports (as well as in life), let me be the first person to tell you. Otherwise, let me be the most recent person to remind you.

The following tables highlight the 12 players picked by the U.S. Selection Committee for the 1976 Olympics, as well as other players mentioned in this post.

Interestingly, the two least productive players for the U.S. team (Tate Armstrong and Steven Sheppard) also were the least productive NBA players. In retrospect, Coach Smith might have chosen differently if only to have kept Butch Lee off of the Puerto Rican team. At a minimum, Lee deserved an invitation to the tryouts as one of the best 56 collegiate players at the time.

Note: Ellis, Tatum, Walton and Benson tried out for but didn’t make the final U.S. team.

*No joke, the Kansas City Kings drafted Ms. Jenner in the 7th round with the team’s 139th overall pick. His point total reflects his score from his 1976 gold medal performance in the decathlon.

Perhaps inspired by his Olympic experience, Lee had a chip on his shoulder that continued into the next college season. Specifically, he stepped up to become Marquette’s best player with averages of 19.6 points, 3.8 rebounds and 3.3 assists per game. Unlike Lee, the team regressed during the regular season with six more losses (i.e. 7 vs. 1). Still, it seemed to respond to Coach Al McGuire’s retirement announcement prior to the 1977 NCAA Tournament. Specifically, the team went out and gave the coach his one and only NCAA Championship.

Lee’s strong play throughout the championship run, including a 19-point performance in the title game, led to him being named the tournament’s Most Outstanding Player. Oh, did I fail to mention that Marquette beat Coach Smith’s North Carolina team 67-59 for the title?

In his senior year, Lee continued where he left off. Of note, he led Marquette to a 24-3 regular season record and a #3 ranking in the AP Poll going into the 1978 NCAA Tournament. As the first tournament with seeded brackets, it was the first one with complaints about the seeding methodology.

For example, Marquette loyalists questioned their team’s anticipated second round match-up against #1 ranked Kentucky. As two of the top four teams in the country, the schools presumably shouldn’t have met up before the Final Four. In the end, any anxiety was premature because Marquette lost in the first round to Miami (OH). As he had done before, Lee put the team on his back and scored 27 points while playing all 45 minutes of the overtime game. Also as before, Lee’s team lost despite his Herculean effort.

As the following table shows, Lee had a very impressive college career.

The previous table makes it appear that Lee was the overwhelming choice for best college basketball player. In reality, he split most of the major awards with his nemesis, Phil Ford. As a reminder, Ford sunk the final free throws to help the U.S. beat Lee and Puerto Rico en route to the 1976 Olympic gold medal. In turn, Lee led Marquette to the 1977 NCAA Championship over Ford and North Carolina.

Based on their tremendous accomplishments, Lee and Ford went into the 1978 Draft ranked as the two best pure point guards. Ford generally was considered the more talented player. However, Lee showed that he was a winner who could carry his teams through tough challenges. With respect to the 1978 NBA Draft, talent beat out heart.

BUTCH LEE AND OTHER NOTABLE PLAYERS FROM THE 1978 NBA DRAFT

Continuing the comparison, Ford clearly outperformed Lee as a professional. The former UNC star came out of the gates strong and won the 1978-79 Rookie of the Year Award. In addition, he averaged 16 points, eight assists, and two steals per game over his first three years. In comparison, the former Marquette star had a decent rookie year with nine points, four assists, and one steal per game. However, his career came to an abrupt halt after he couldn’t recover from surgery to repair cartilage in his right knee.

As the following table shows, Lee was a completely different player before and after the injury.

Based on Lee’s career total of 2.4 win shares, some of you might reasonably call him a bust. In particular, over 95% of players taken with a #6-10 pick have exceed that total since the 1970 NBA Draft. However, that assessment is overly punitive for someone unable to recover from an injured knee.

As someone using analytics for my findings (sorry Sir Charles), I wish more tape existed from that era because Alfred “Butch” Lee would have been a fun player to watch. In case it isn’t obvious by now, I granted him an injury exemption and refuse to label him a Top 10 Bust (or even an Honorable Mention). See, this site isn’t all negative.