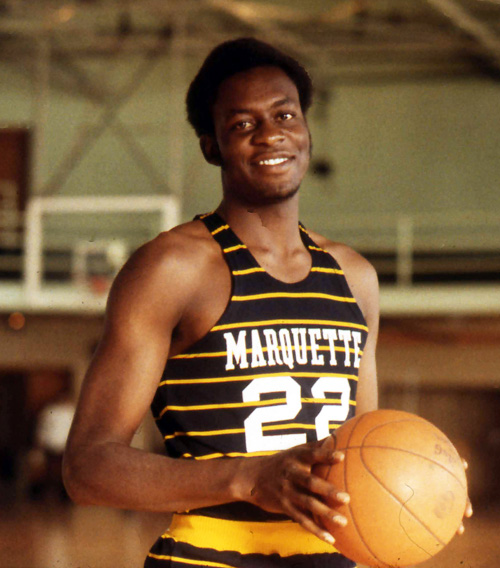 Synopsis: Established in 1967, the ABA helped change professional basketball for the better before “merging” with the NBA in 1976. To name only a few positive developments resulting from the ABA:

At the same time, fans had to put up with questionable styles (such as the red, white and blue basketball, and whatever Larry Brown is wearing in the photo), and players had to endure schemes to convince them to join the newer league. As described in the following post, Jim Chones was such a player who joined the ABA under unsavory circumstances.

Prior to the existence of the ABA, players couldn’t play in the NBA (or even be eligible for the draft) until they were out of high school for four years. Usually, the restriction ensured that players would stay in college for all four years; although, Wilt Chamberlain notably left the University of Kansas early so he ended up being a Harlem Globetrotter for one year before entering the 1959 NBA Draft. Once the ABA was formed in 1967, players didn’t have to wait for four years to play legitimate professional basketball anymore. Technically, the ABA had the same eligibility restriction for its draft as the NBA, but the new league allowed a player who left college early to sign as an undrafted free agent with any team willing to forfeit its first round pick in the next draft.

Of note, Julius Erving left college after his junior season in 1971 so he couldn’t be drafted by either an NBA or ABA team; however, he signed with the Virginia Squires before the 1971-72 ABA season so the Squires had to give up its 1972 first round pick. As a New York City native, Erving had expressed an interest in playing for the New York Nets, but the team refused to sign him due to a team policy (i.e. he was too young to be drafted). As you might imagine, the Nets changed their policy pretty quickly after seeing Erving average 27 points and 16 rebounds per game as a rookie for the Squires.

Initially, the NBA didn’t seem to mind losing out on the few college players who left school early; however, the league ended up changing its eligibility requirements in response to a negative Supreme Court ruling from March 1971 involving Spencer Haywood and the Seattle SuperSonics. After only his second year of college, Haywood left the University of Detroit and signed with the Denver Rockets of the ABA prior to the 1969-70 season. As a rookie, Haywood not only led the ABA with almost 30 points and 20 rebounds per game, but also was named league MVP.

Despite still not being eligible for the 1970 NBA Draft, Haywood signed as a free agent with the NBA’s Seattle SuperSonics (now the Oklahoma City Thunder). Together, Haywood and Sonics’ owner Sam Schulman challenged the NBA’s draft eligibility requirement and won. Staring with a supplemental draft in the fall of 1971 and then as part of its 1972 Draft, the NBA removed the four-year restriction for any player who could prove that a financial hardship required him to turn professional sooner. Presumably, the NBA’s standard to prove such a hardship was as restrictive back then as California’s standard to prove a medical condition worthy of a marijuana prescription is today.

Unwilling to sit quietly, the ABA upped the ante by opening its 1972 draft to all players and not just ones proving financial hardship. Specifically, the league allowed each team to draft one underage player in the first five rounds as long as the team committed to keep the player on its roster for at least one year. In addition, the ABA moved its draft up to early March in order to get a jump on the NBA draft, which was scheduled for mid-April. Whereas the NBA waited until the end of its regular season as well as the conclusion of the NCAA and NIT college tournaments, the ABA held its draft before the final standings were determined. Granted, the ABA’s regular season was approximately 80% complete, but its use of the interim standings to determine draft order was haphazard to say the least.

Adding to the confusion, the league gave the New York Nets the first overall pick in 1972 as compensation for losing out on Dr. J. in 1971. The Nets apparently chose not to negotiate with Erving, yet somehow still got a compensatory pick. Don’t worry, there’s no reason to cry foul because collusion was not verboten in the ABA. For example, the ABA teams got together in 1971 to ensure that Artis Gilmore would go to a team that could afford to keep him after Denver proved to be unable to retain Haywood for more than one year. As such, Gilmore was drafted by the Kentucky Colonels with the 8th overall pick in 1971 despite having talent worthy of the 1st overall pick. Not surprisingly, Gilmore confirmed that assessment by winning the league MVP as a rookie after averaging 24 points, 18 rebounds and 5 blocks per game. Furthermore, Gilmore made 5 All-Star appearances, won the 1975 Championship, and became the league’s all-time leader in win shares during his five years with the Colonels. While the league’s favoritism to Kentucky was anti-competitive, it helped build credibility leading up to the NBA/ABA merger in 1976. Perhaps to its credit, the ABA openly acted in the league’s best interests and didn’t worry about hiding behind a rigged lottery, or two, or ten.

As previously discussed, the Nets reportedly had a team policy against signing underage players in 1971, yet became absolutely predatorial in the pursuit of Marquette junior Jim Chones in 1972. Presumably, the Nets had targeted Chones with its first overall pick but wanted to sign him before the actual draft so as not to waste a valuable pick on someone who might go to the NBA instead. According to an SI article written in late February 1972, Chones’ attorney had assured that his client would accept the proposed offer after the college season ended, but the Nets weren’t satisfied. Instead, the team told him on February 17th that Chones had ten hours to accept the deal or risk it going away completely. As someone whose father had died two years earlier and whose mother struggled raising her five children on a $1.85/hour job, Chones took the deal. When asked how he felt, Chones responded, “I heard angels singing and water running off a mountain.” Apparently, the team was as persuasive as Mavericks’ owner (and Shark Tank investor) Mark Cuban can be when convincing scared entrepreneurs to not only accept an exploding offer (i.e. one that expires if not taken immediately), but also appreciate him for it.

By signing the contract, Chones relinquished his remaining college eligibility effective immediately. At the time, Marquette was ranked #2 in the country and viewed as the best challenge to knock off the five-time defending NCAA Champion UCLA Bruins. According to the same SI article referenced above, Marquette Coach Al McGuire advised his player to take the deal even though it meant the end of the team’s title hopes. When asked about the decision, McGuire casually said, “I’ll just have to take it like he broke a leg and couldn’t play anymore.” As expected, the loss of the All American junior was too much. After starting the season 21-0 with Chones, Marquette finished the year by going 4-4 and only won one game in the NCAA tournament without him.

For all that the Nets offered him to leave Marquette prematurely, Chones only lasted one year in New York before joining up with the stylistic Coach Brown and the Carolina Cougars. Subsequently, he only lasted one year in Carolina before jumping to the NBA and joining the Cleveland Cavaliers. Overall, Chones had a respectable 10-year career in both leagues with almost 10,000 points and over 6,000 rebounds.

Given his financial situation, no one can fault Chones for cutting his amateur career short, but we all have to wonder what might have been. As previously mentioned, Marquette was 21-0 at the time Chones ended his college career because he signed a contract to join the ABA. One year earlier, he led Marquette to a 28-1 record with the team’s only blemish being a 1-point loss to Ohio State in the regional semi-finals of the 1971 NCAA tournament. In total, Marquette was 49-1 with Chones on the floor; however, he is rarely mentioned as one of the all-time college greats even though he clearly dominated the college game. Instead, Chones’ dream ended early because the ABA decided to hold its draft in the middle of the college, as well as its own, season. For this reason, the ABA Draft earns its own Honorable Mention as a Top 10 Bust.