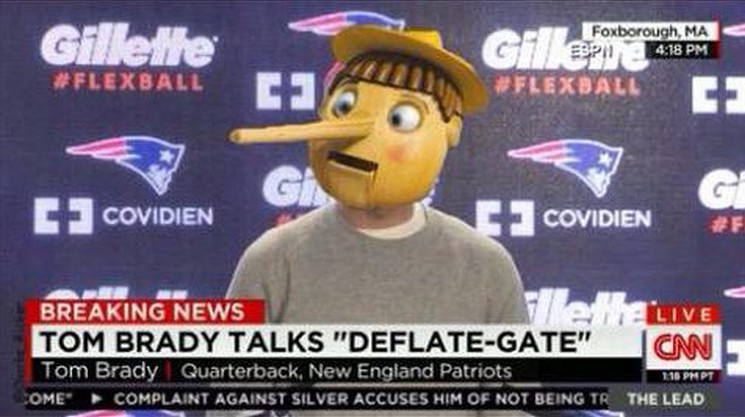 Synopsis: Somehow, 11 out of 12 footballs used by the New England Patriots in the 1st half of the 2015 AFC Championship Game became “significantly” deflated. At the time of this post, we’ve heard from Bill Belichick twice and Tom Brady once. Initially, they both embraced the strategy of deny, deny, deny. Now, Belichick is trying to play scientist and make excuses. Do I think either one did anything to alter the football directly? No. Do I think at least Brady knows who did? Yes. This post will expose the inconsistencies in their stories to the point of busting Tom Brady’s Golden Boy image. Whether this scandal (to be forever known as Deflategate) will tarnish his legacy, only time will tell.

Almost one year ago, Dallas Mavericks owner Mark Cuban predicted that the NFL would implode in ten years. I initially thought his comments reflected his envy towards a more popular league with more valuable franchises. Then, I read his actual quote about NFL owners.

He followed up the quote with a Facebook post outlining concerns about the league. Specifically, he highlighted the inherent dangers from playing the sport, players’ bad behavior, reliance on Fantasy Football, and changing viewer habits. After further consideration, I realized that Cuban made a legitimate argument.

Since Cuban made his thoughts public, the NFL has suffered several blows to its image. The 2014-15 season started with a complete PR fiasco regarding the league’s handling of Ray Rice’s physical assault of his then fiancee and now wife. It was a well publicized example of an organization trying to sweep a player’s bad behavior under the rug. The league suffered another PR problem when Adrian Peterson, one of its marquee superstars, faced charges for beating his 4-year-old son.

Now, the league faces another controversy (i.e. Deflategate). Surprisingly, this one may be even more detrimental to the long-term viability of the league because it goes to the integrity of the game. Brady using deflated footballs may seem benign to certain NFL insiders (especially ones partial to the Patriots). However, it’s malignant to the rest of America (especially the ones betting on games and playing Fantasy Football). Either the NFL deals with Deflategate straight-on or risks spreading the cancer and making Cuban’s prediction more likely.

Albeit faint, my first memory of the fallout from the Watergate scandal was watching a news clip of President Nixon getting on a helicopter and giving America an ironic victory sign.

Back then, families crowded around their TVs for moments like these. With my Fisher Price Play Family Airport already set up in front of our living room TV, I mimicked Tricky Dick being whisked away.

That scandal is so ensconced in pop culture that the significance of all other scandals is based on putting a “gate” at the end of it. In the NFL, we have been exposed to Spygate, Bountygate, and now Deflategate in the last eight years alone. Interestingly, the main culprits from two of those scandals were Tom Brady and the Patriots.

As a quick refresher, Spygate involved the Patriots videotaping defensive signals from other teams such that Brady could know what the opposing defense would do (e.g. blitz, fall back in coverage, etc.) before a play even started. Many NFL coaches commented that teams try to steal signals all the time, but the use of videotape went over the line because the league specifically warned them that it was illegal. Presumably, Belichick violated the rule for a few years but only got caught after videotaping the Jets while they were being coached by former Patriots assistant Eric Mangini. Some may fault Mangini for ratting out his former boss. Then again, I fault Belichick for his arrogance to cheat against someone who intimately knew his modus operandi.

Belichick has always claimed that the benefit from knowing the other team’s signals was small. Gary Myers of the NY Daily News recently recounted a conversation he had with Patriots owner Robert Kraft back in 2007. When Kraft asked Belichick how much the videotaping helped on a scale from 1 to 100, Belichick told him, “One.” Apparently Kraft responded by saying, “Then you’re a real schmuck.” Why is the exchange relevant? Because it shows that Belichick is willing to cheat even when the reward is minimal. If changing the ball pressure would have helped in the least, Belichick would have known about it and used that knowledge to his advantage.

I’ve heard all week that the American public is only interested in Deflategate because it involves the Patriots. Really? Let’s say an NFL referee found a slippery foreign substance (e.g. Vaseline) on the football used for the onside kick recovered by the Seahawks in the NFC Championship Game last Sunday. Would the Seahawks get a free pass because they’re not the Patriots? Would we be less interested if ESPN’s SportsScience determined that Packers’ tight-end Brandon Bostick would have flubbed the onside kick anyway? Would it matter less if former kickers said they used to do it too? No. No. And No. Deflategate is resonating beyond the sports community because it’s a compelling side story to the biggest media event of the year.

According to the NEA (National Education Association), studies show that somewhere between 80-95% of all students have cheated in school. According to ME (me), approximately 5-20% of students who participated in those studies lied. Every student understands the risk versus the reward involved in cheating. Since the likelihood of getting caught is not high, the reward of a higher grade or avoiding a detention is worth the risk. As such, the punishment has to be great enough to dissuade others from doing it. Depending on how egregious the violation, a student who gets caught risks getting an F on the assignment or in the class. A student who gets caught multiple times risks getting suspended or even expelled. Sorry Bill, but you got caught and this isn’t your first time.

From a young age, I remember learning that the cover-up of a crime is often worse than the actual wrong-doing. I was told that Nixon spying on the Democrats regarding an election he was going to win anyway wasn’t as bad as lying about it or destroying evidence proving that he knew about it. I thought my parents were trying to trick me into fessing up when I did something wrong, but realized later in life that it wasn’t a trick. After all, President Clinton was impeached because he lied under oath, not because he blew his manchowder on a 21-year old intern’s blue dress while on the phone in the Oval Office. Take it from here Yakov, “America,

So why do people lie? Because they get away with it much more often than they don’t.  Although usually more eloquent, Richard Sherman summarized Deflategate by saying, “Whatever they [the Patriots] did, the risk-reward was greater.” Said differently, people cheat and then lie about it because the reward is worth the risk. As long as Brady can hold out for one more week and win his record-tying 4th Super Bowl, any potential penalty will have been worth the risk.

If you’re old enough, you’ll never forget President Clinton wagging his finger and telling us, “I did not have sexual relations with that woman, Miss Lewinsky.” He was convincing, but it was a complete lie.

Do you remember Rafael Palmeiro repeating Clinton’s gesture in March 2005 when saying, “I did not take steroids. Period,” only to be suspended for testing positive for steroids five months later. Given the time delay between the failed test and the announcement of the suspension, Palmeiro was probably “juiced” during his testimony.

As we wait for the NFL’s investigation regarding Deflategate to conclude, what do we know?

[Four months after this post was written, the NFL released the results of its internal investigation of Deflategate in the now-infamous Wells Report. I created a new post updating this story, but one statement from the previous list needs to be corrected. In particular, the second bullet point regarding 11 of 12 Patriots balls being deflated by more than 2.0 PSI was exaggerated. Apparently, there was confusion about the definition of “significantly” when the NFL leaked the information about the deflated balls.

With respect to the 11 Patriots footballs still in play before the start of the second half:

Assuming that “signficantly” deflated meant that the balls needed to be reinflated by at least 1.0 PSI, then the second bullet point from the original post would have been accurate.]

Brilliant liars are convincing because they’ve convinced themselves that they’re not lying. When Clinton testified about his affair with Monica Lewinsky, he said “There’s [There is] nothing going on between us.” Later, he argued that his answer was truthful because he did not have a relationship with Lewinsky at that precise moment. In particular, he rationalized any confusion regarding his statement by saying, “It depends upon what the meaning of the word ‘is’ is.” Really? That sounds like something a delusional person would say. Furthermore, he argued that a blow job was not “sexual relations” because oral sex was somehow omitted from the definition of “sexual relations” in a court document. At that point, Clinton was borderline sociopathic.

Let’s judge if Belichick was a brilliant liar during his press conference from this past Thursday (i.e. four days after the AFC Championship Game). To help with the effort, I have developed a BS Scale ranging from Frigid (i.e. completely believable without any underlying deception) to Steaming Hot (i.e. a steaming pile of BS).

Even though Brady was supposed to hold a press conference on Friday, it got moved up to Thursday after Belichick’s “supportive” comments earlier in the day. Let’s see if Brady did any better on the BS Scale with his answers to the media’s questions.

For perhaps the first time ever, Belichick called a press conference to go over the Patriots own internal investigation. While talking to the media, Dr. Belichick showed that he learned a lot about football air pressure in two days. Whereas the team’s first two press conferences focused on denying all allegations, this one focused on confusing the situation by introducing hypothetical excuses. Here are some of the excuses introduced by Belichick as well as other highlights from the press conference.

Summary: Regardless of any evidence produced before the NFL’s official investigation of Deflategate is completed (and perhaps afterward too), supporters of the Patriots will continue to believe what Bill and Tom have sold them while others won’t. Brady is already on the Mount Rushmore of the NFL’s greatest quarterbacks but there are only two remaining questions to be answered:

Whether you believe that Deflategate is legitimate or not, get ready for a fun ride.