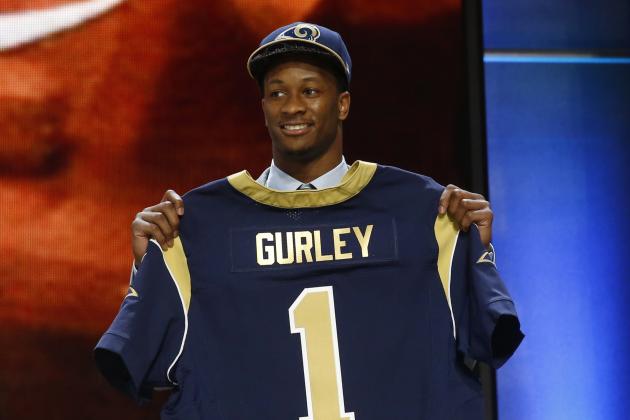 RETURN OF THE RUNNING BACK?

Synopsis: The most interesting debate from the first night of the 2015 NFL Draft involved the exchange between Chris Berman and Mel Kiper regarding the sensibility of taking a running back in the first round. As Berman pushed for teams to select highly rated running backs Todd Gurley and Mel Gordon, Kiper argued that teams shouldn’t waste a first round pick on either player. Specifically, the long-time NFL draft expert claimed productive running backs could be found in later rounds. In response, I researched early first round picks to determine which positions provide the most value.

So, which position offers the best risk/return profile? You’ll just have to read on.

As a clarification, with respect to all quarterbacks taken with a top 10 overall pick from 1977-2007:

More than any other position, quarterbacks represent the biggest gamble. Despite tremendous scouting efforts, teams do the worst job evaluating quarterbacks. Out of the 36 quarterbacks selected with one of the first ten draft picks from 1977-2007, almost 30% (10) were complete busts. In fact, seven of them (19%) were selected as Top 10 Busts. Given the importance of the position, teams are willing to overlook the odds of wasting a high draft pick on a quarterback. In addition, they seem to forget that the best QBs in the last 40 years were later round picks (i.e. Joe Montana in the 3rd round and Tom Brady in the 6th round).

Evaluation of a top 10 draft pick being used on a quarterback:

Due to the physical beating that running backs endure, they certainly don’t have the longevity of quarterbacks. However, they don’t represent the same downside risk either. Out of the 42 running backs taken with a top ten overall pick from 1977-2007, eight (approximately 20%) were bust-worthy with WAVs of 18 or lower.

Trent Richardson, the 2013 #3 overall pick, currently has a WAV of 17. He had a reasonably productive rookie season with 12 touchdowns and over 1,300 yards from scrimmage. Since then, he’s been a big disappointment. At this point, he still has time to change the trajectory of his career. However, the likelihood of him avoiding bust status is dwindling fast.

In contrast to these players, approximately two-thirds of running backs drafted early in the first round have accumulated at least 5,000 yards from scrimmage. Furthermore, one-half have been very productive with at least 10,000 yards from scrimmage. There seems to be a growing sentiment to wait when drafting running backs because productive rushers have been selected in later rounds.

Drafted in 1957, Jim Brown played well before the sample used in my evaluation. Still, I included him in case you wondered where the all-time greatest back went in the draft.

Are you satisfied? No? Okay,

I could keep going but you get the point. Whereas teams might be able to secure a productive rusher after the first round, the very best ones deserve being a 1st round pick.

EVALUATION: TAKING A RUNNING BACK WITH A TOP 10 PICK

With respect to the top ten leaders in career receiving yards, seven were 1st round picks but only two (Tim Brown and James Lofton) were top ten overall picks.

The other three top 10 receivers taken after the 1st round) are:

Based on this list of players, the greatest receivers historically were mid to late 1st round picks. Given the increased importance of a passing attack, teams are willing to pull the trigger earlier so that trend will likely change once the careers of Andre Johnson (a 3rd overall pick) with 13,597 yards and Calvin Johnson (a 2nd overall pick) with 10,405 yards are finished.

Out of 42 receivers (including tight ends) selected with top 10 overall picks from 1977-2007, eight arguably were busts:

Out of this group, Rogers was a Top 10 Bust (#4) while Williamson received an Honorable Mention.  As more receivers are taken early, there will be more potential candidates going forward.

EVALUATION: TAKING A WIDE RECEIVER WITH A TOP 10 PICK

Unlike other positions, offensive linemen don’t have the benefit of easily quantifiable statistics to evaluate their performance. That being said, a combination of WAV and Pro Bowl appearances seems to meet the eye test. Arguably, the best three offensive linemen in history were:

Of note, they all were drafted early in the 1st round. As the following table shows, the next grouping of the all-time greatest offensive linemen includes four picks from the 1st round and three picks from later rounds.

With respect to the 46 offensive linemen taken with a top ten overall pick from 1997-2007, only two became busts. That exhaustive list includes 1986 #7 pick Brian Jozwiak with a WAV of 3 and 1985 #9 pick Kevin Allen with a WAV of 3. Jozwiak suffered a career-ending hip injury so he had an excuse. On the other hand Allen didn’t.

Specifically, Allen had a bad rookie year that started out with him showing up late and out of shape. After testing positive to cocaine in camp prior to his second season, he got cut. Within a week, he was charged with rape and later spent 2 1/2 years in prison. Come to think of it, I might need to revisit my Top 10 Bust list.

Evaluation of a top 10 draft pick being used on an offensive lineman: