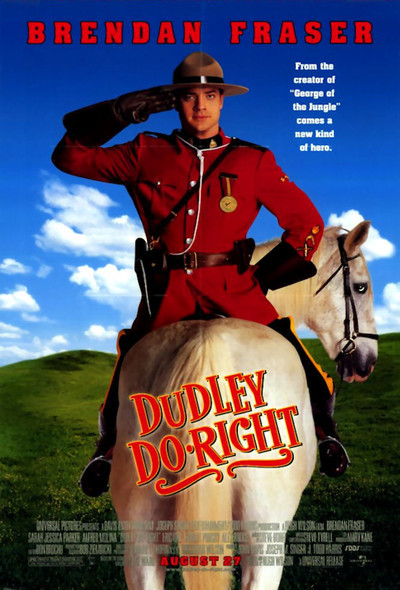 Synopsis: In honor of Thanksgiving, I prepared a double feature of Brendan Fraser turkeys. Opening the twin bill at 6A, Dudley Do-Right (1999) failed despite seemingly having the ingredients to succeed. Of note, the movie followed the formula of Fraser’s prior hit George of the Jungle (1997). Specifically, the actor went back to the well by portraying a likable doofus in a live-action adaptation of a 1960s cartoon. Furthermore, the film had an accomplished writer/director. Serving both roles, Hugh Wilson had an impressive track record which included the classic TV show WKRP in Cincinnati (1978-82) and hit movie Police Academy (1984). Even with a marketable star, a talented creative influence, and a sizable production budget of $75 million, Dudley Do-Right flopped with only $10 million at the box office. I have my own theory about why the film became a Top 10 Bust, but you’ll have to read this to find out.

Based on the success of Encino Man (1992), Brendan Fraser likely thought he would become a Hollywood star. Portraying a thawed-out caveman in his first studio film, Fraser stole the show and helped turn the movie into a “sleeper”‘ hit. His next movie, School Ties (1992), performed marginally at the box office. However, it still helped elevate his status due to his top billing over up-and-comers Chris O’Donnell, Matt Damon and Ben Affleck. Fraser got a reality check from there given the failure of Airheads (1994) and The Scout (1994). Of note, both movies combined to generate less than $10 million in ticket sales.

Despite the declining popularity of his movies, Fraser got the lead role in Disney’s big-budget production of George of the Jungle (1997). The movie received “Two Thumbs Ups” from Siskel and Ebert for being a smart and funny live-action adaptation of the popular cartoon. Ebert even quipped that it was “about a doofus but not made by a doofus.” For any fans of the legendary movie critics, you can imagine Siskel’s reaction to his partner’s comment. With a worldwide box office total of almost $175 million, the film had commercial as well as critical success.

Fraser next starred in The Mummy (1999), which served as a high-tech remake of a 1932 movie with the same title. For the modern version, writer-director Stephen Sommers envisioned a campy action-adventure love story. Based on his command of over-the-top humor, Fraser seemed to be ideally suited for the lead role. He certainly fit the bill better than than the other stars rumored to have turned it down (e.g. Tom Cruise, Brad Pitt, Matt Damon, and Ben Affleck). Despite having mixed critical reviews, the movie became a blockbuster by generating over $400 million in worldwide ticket sales.

The acclaimed director referenced in the advertising for Dudley Do-Right was Hugh Wilson. Primarily a writer for TV sit-coms in the 1970s (e.g. WKRP in Cincinnati), Wilson hit it big as the writer/director of Police Academy (1984). Due to its success, that movie spawned six sequels. I stopped watching the franchise after the third installment because the movies became unwatchable. Still, I recently tried to introduce my 13-year-old son to the original. Unlike other classic 80s comedies like Caddyshack (1980) or Stripes (1981), Police Academy just doesn’t stand the test of time.

After returning to the small screen for a few years, Wilson got another shot on the big screen as the writer/director of Guarding Tess (1994) starring Nicolas Cage and Shirley MacLaine. While certainly not a great movie, it helped get him another directing assignment for The First Wives Club (1996). That movie, which starred Goldie Hawn, Bette Midler and Diane Keaton, generated over $180 million worldwide. Based on his track record, Wilson became the writer/director of Blast from the Past and Dudley Do-Right. As a reminder, Fraser starred in both movies.

When cast as the female lead, Sarah Jessica Parker might have been best known for playing the object of desire in Honeymoon in Vegas (1992). Despite the success of her movies in which she co-starred, Parker failed to be a compelling draw as the lead. In particular, Miami Rhapsody (1995) and If Lucy Fell (1996) combined to generate less than $8 million in ticket sales.

By the time of the Dudley Do-Right’s release date, Parker had just completed her second season as Carrie Bradshaw on the popular HBO series Sex and the City (1998-2004). As such, she had a completely new fan base. Unfortunately, that fan base had no interest in a live-action adaptation of a 1960s cartoon.

Despite any similarities, George of the Jungle succeeded while Dudley Do-Right flopped. Based on a review written by Kenneth Turan of the Los Angeles Times, the distinction seemed understandable. In particular, Turan provided the following thoughts.

Casting Fraser as Dudley turns out to be too much of a good thing, a case of Blank Look Overkill.

But worse news is yet to come, because as uninspiring as Fraser is, the likable actor is still the best thing about this tiresome, inept farce that’s not even a fraction as clever or entertaining as it likes to imagine it is.

“Dudley” disappoints in every way possible, forcing its failed tongue-in-cheek humor and proving one more time that not all successful cartoons cry out for live-action treatment.

While entertaining, this scathing review didn’t represent the movie’s Metascore of 44. For instance, Ebert offered the following comment.

Fraser is stalwart and credulous as Dudley, Parker is wide-eyed and easily astonished as Nell, and Molina plays Whiplash so broadly he almost needs to stand sideways. Viewers below a certain age (9?) will probably find the movie enormously entertaining, and, truth to tell, I kinda sorta liked it myself. Not enough to recommend to those in the upper grades, but enough to remember parts with a smile.

With a Metascore of 53, George of the Jungle fared somewhat better with the critics. However, it fared much better with moviegoers. From my perspective, the difference had more to do with nostalgia than the quality of the movies. When reminiscing with similarly aged adults about cartoons from our childhoods, I often hear passionate imitations of “George, George, George of the Jungle, strong as he can be . . . ” In contrast, I rarely hear much passion regarding Dudley Do-Right.

My contribution to those conversations usually includes the observation that George’s actions (like smashing into a tree) were silly, but still funny. On the other hand, Dudley’s actions (like riding a horse backwards) were inane and not funny. Others might not differentiate between the characters in a similar way. Then again, the disparate box office totals support the argument that viewers remembered one much more fondly than the other.

To test my theory, I looked at the success of other live-action adaptations of cartoons.

Indistinguishable to the critics (i.e. Metascores ranging from 36-38), the movies fared dramatically differently at the box office. Perhaps, the success of the movies depended more on parents’ recollections of the cartoons than the critics’ reviews.

In 1999, Fraser starred in one of the biggest hits (The Mummy) and misses (Dudley Do-Right) of the year. That dynamic repeated itself in 2001 when he starred in The Mummy Returns (over $430 million at the box office) and Monkeybone (under $8 million). In my next post, I’ll explore the failure of Monkeybone as an example of another all-time box office bust.

Fraser struggled throughout the 2000s trying to break free of stereotypical roles. Of note, his only success involved playing comical/goofy action heroes in two Mummy sequels and Journey to the Center of the Earth (2008). Apparently out of loyalty to the original director, Fraser declined returning for Journey 2: The Mysterious Island (2011). With a new star (Dwayne “The Rock” Johnson replaced Fraser) and new director (Brad Peyton replaced Eric Brevig), Journey 2 did even better at the box office ($335 million vs. $242 million). Not that it really matters, but moviegoers didn’t seem to mind that the sequel received worse reviews (Metascore of 41 vs. 57).

Since 2008, Fraser’s most successful film has been Gimme Shelter (2013) starring Rosario Dawson and Vanessa Hudgens. Fraser received third billing in the movie, which generated a whopping $1 million in ticket sales. Ouch! Perhaps the best way to characterize Fraser’s roller coaster career is offered by Chuckie Miller (Seth Green) in Can’t Buy Me Love (1987). When describing the influence that the popular girl had on his nerdy brother (Patrick Dempsey), Chuckie says, “You took him from geek status to king status to no status.”

With respect to Fraser’s career, Chuckie might provide the following support for his quote.

KING STATUS – GEORGE OF THE JUNGLE / THE MUMMY

NO STATUS – SINCE THE END OF THE MUMMY TRIOLOGY

To the extent Fraser achieved “King” status because of his roles in George of the Jungle and the Mummy franchise, Parker achieved “Queen” status because of her role on Sex and the City. The successful series lasted for six seasons on HBO, and led to two blockbuster movies which combined to gross over $700 million worldwide. She has had roles in other movies (e.g. Failure to Launch, Did you Hear About the Morgans) over the last ten years. Still, none has matched the drawing power of Carrie Bradshaw. Unlike her Dudley Do-Right co-star, Parker has maintained her physical appearance throughout her career.

SEX AND THE CITY 2

Interestingly, SJP became one of the first actors/actresses to make a return to the small screen seem like a good career choice to relaunch a movie career. Her newest project, Divorce, is a half-hour HBO comedy series so she’s poised to do it again.

The following table summarizes the box office totals for the movies referenced in the previous sections.