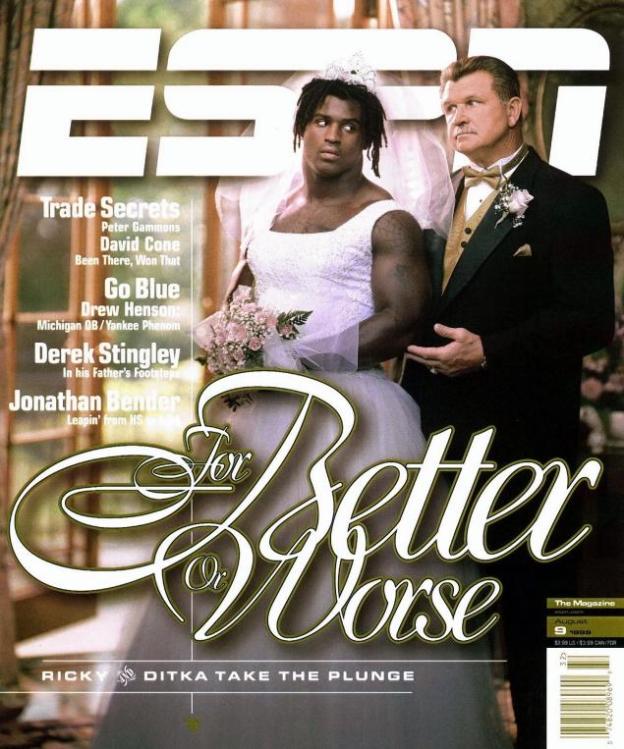 Synopsis: As you might expect, higher draft picks have more productive careers than lower draft picks. Still, have you ever wondered by how much? Pro-football-reference.com has developed a proprietary statistic which can answer that exact question. Called Weighted Career Approximate Value (WCAV), it can be used to compare the overall production of different players. In this post, I use WCAV to evaluate the career of 1999 #5 overall pick Ricky Williams.

As I write this post after only three weeks of the 2014 NFL season, the rookies have dominated the headlines.

[Before going forward, please note that I have updated this post to keep the content more current. I have highlighted any changes by using red font for them.]

Clearly, these rookies have a lot of time to prove their worth. In contrast, many hyped picks from previous drafts already have failed to live up to expectations. In honor of those players, my first countdown of Top 10 Busts includes a ranking of failures from the NFL draft.

I fully understand that numerous other sites already offer rankings of NFL draft busts. However, too many of them lack sufficient quantitative analysis for my taste. They tend to offer limited justification, which could meet the scrutiny and character limitation of a Tweet. In contrast, I hope to provide a thoughtful analysis based on well-defined criteria.

Using ESPN programming as a guide, I’m shooting for content and tone similar to 30 for 30 and OTL versus First Take. Alternatively, imagine a blend of CBS Evening News (Cronkite, not Rather) and 60 Minutes versus TMZ. If you’re unfamiliar with any of these programs, you’ll miss out on certain cultural references. Regardless, the analysis should stand on its own.

Before describing my criteria, I need to give due recognition to pro-football-reference.com. In particular, that website aggregates hundreds of statistics and makes them easy to download for further analysis. Founder Doug Drinen even created a statistic that can be used to summarize a player’s career in one number.

Known as Weighted Career Approximate Value (WCAV), that stat has some flaws. Furthermore, it doesn’t have the same robustness or general awareness as Wins Above Replacement (WAR) has for baseball. Still, it’s the best statistic I’ve seen to put all football players on one scale.

As a starting point, the following table provides a ranking of the greatest all-time NFL players based on WCAV.

[Note: Since my original post, QB Drew Brees entered the ranking and has moved all the way to #3. In turn, CB Rod Woodson dropped off the list with his WCAV of 141.]

Purely based on regular season stats, WCAV favors longevity over clutch or peak performance. As such, players like Joe Montana (WCAV of 123) and Jim Brown (WAV of 108) don’t show up in the ranking. Still, I’m impressed that one statistic can be used to create the previous list of all-time greats.

In addition to offering a basis to rank current or retired players, WCAV can be used to predict the career production of future players. Specifically, I averaged the WCAV of all NFL players drafted from 1977-2008 as a proxy for a player’s expected value based on his draft position.

As indicated by the table, higher picks tend to offer more value than lower picks. More interestingly, the numbers show that average production declines very quickly at the top and only gradually at the bottom of the draft. Relative to the average WCAV for one of the first four picks in the draft, the value of subsequent picks declines by the following percentages.

In essence, the chart supports the intuition that the best players go early. Less obviously, the total value of draft picks from the first two rounds exceeds the combined total value from the last five rounds.

Based on WCAV, a 6th or 7th round pick offers similar value. While some late-round picks become future superstars (e.g. Tom Brady), most never see any significant playing time. As such, these picks can be considered crapshoots. Some hit big, but most “crap out.”

The expected value from a 4th or 5th round pick exceeds the value of a 6th or 7th round pick by 50%. While still rare, superstars emerge with a greater frequency in these earlier rounds. However, the biggest difference between a 4th or 7th rounder involves the likelihood of making the team and becoming at least a marginal contributor for a few years. They’re still crapshoots, only with 50% better odds.

In comparison, players taken in the first three rounds produce a lot more.

EVALUATING THE TRADE FOR RICKY WILLIAMS

Arguably, a team could/should use the table when evaluating trades involving future draft picks. For example, former Saints GM Mike Ditka could have calculated the estimated cost of trading for the rights to Ricky Williams back in 1999. If he had, he may have realized the size of the gamble he placed on the former Heisman-winning running back.

Specifically, Ditka traded to the following picks in order to move up from the 12th to 5th spot in the 1999 Draft.

In essence, Da Coach traded picks with a total WCAV of 175 for a pick with a WCAV of 50. In order for the trade to be worth all of the surrendered picks, Williams would have needed to match the regular-season career of Peyton Manning. Perhaps needless to say, those expectations were unreasonable.

RICKY WILLIAMS AND COACH DITKA – WHAT A BEAUTIFUL COUPLE!

Before telling the dealer that you’d like to split your aces, your new friend makes you an offer.

At the same time, you realize that your buddy might really make out if he re-splits aces and gets four blackjacks. With those odds being 1 in 2,000, you hopefully take the offer and say, “Thanks Mike.” After all, that’s exactly what Ditka did to trade for Ricky Williams. Of course, the numbers from the story would need to be multiplied by 1 million to be more accurate.

In his rookie season, Williams rushed for almost 900 yards but only two touchdowns. While not great, those numbers weren’t bad for someone limited to 12 games because of injuries. However, he represented the team’s entire 1999 Draft so he had a much higher standard to meet. After finishing with a 3-13 record, the Saints fully understand that the gamble had failed so they fired their misguided coach.

Two years later, Williams wore out his welcome as well. Despite averaging over 1,000 yards and 5 touchdowns per season, the running back got sent to Miami for a couple late 1st round picks. Perhaps without the same pressure, he became a 1st Team All-Pro after rushing for 1,800 yards and 16 touchdowns in his first season with the Dolphins. Williams certainly wasn’t the equivalent of four blackjacks on re-split aces, but he proved to be worth at least one.

The whole episode provided another example of the Peter Principle. Specifically, the theory states that business managers tend to rise until they prove their incompetence. I propose renaming it the Mike Motif as it relates to the NFL. Of note, both Mike Ditka and Mike Holmgren proved to be a great head coaches who failed as general managers. And coaches wonder why they’re often asked to cook without being allowed to shop for the groceries.

Despite some bumps in the road, Ricky Williams actually had a very productive career. In fact, he finished as a Top 30 all-time rusher with over 10,000 yards. His total WCAV of 76 exceeded the average WCAV for a Top 10 overall pick by 40%. Still, it didn’t come anywhere close to the 175 needed to make the trade worthwhile.

Based on his production, it’s unfair to consider Williams a bad pick. However, he didn’t produce enough with the Saints to help Ditka avoid being remembered as the engineer of a really bad trade. With an overeager groom and disinterested bridge (remember the photo), this marriage just couldn’t survive.